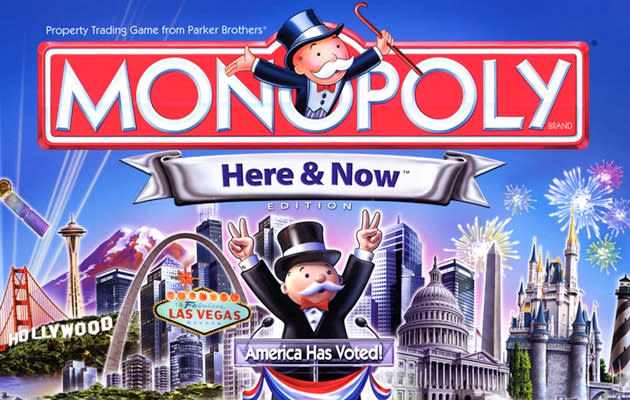 In a world where most people chill out with Minecraft and Candy Crush, it's hard to get excited about a board game. Perhaps that's the point however, since Hasbro is hoping that we'll get misty-eyed with nostalgia about the family arguments that ensue from playing Monopoly. The game's 80th birthday is rapidly approaching, and so the company is teaming up with Buzzfeed to ask the denizens of the internet to help design the next version of the game.

In travel-themed version of the game Monopoly: Here & Now, users visit cities of the US or the world, collecting passport stamps. Users will be asked to vote on which US cities will be eligible for the America-only edition, as well as global locations for the, er, global version that'll be sold everywhere else. If your city isn't mentioned, March 3rd and March 9th is "Wild Card Week," where people can write-in specific locations and encourage others to do the same. The folks over at Buzzfeed will be tallying all of the votes, as well as, presumably, creating .GIF-filled lists of reasons why we should vote for Adamstown over Medellin, for instance.

In this article: Arguments, BoardGames, Buzzfeed, Hasbro, Monopoly, MonopolyHereNow, ToyFair
All products recommended by Engadget are selected by our editorial team, independent of our parent company. Some of our stories include affiliate links. If you buy something through one of these links, we may earn an affiliate commission.