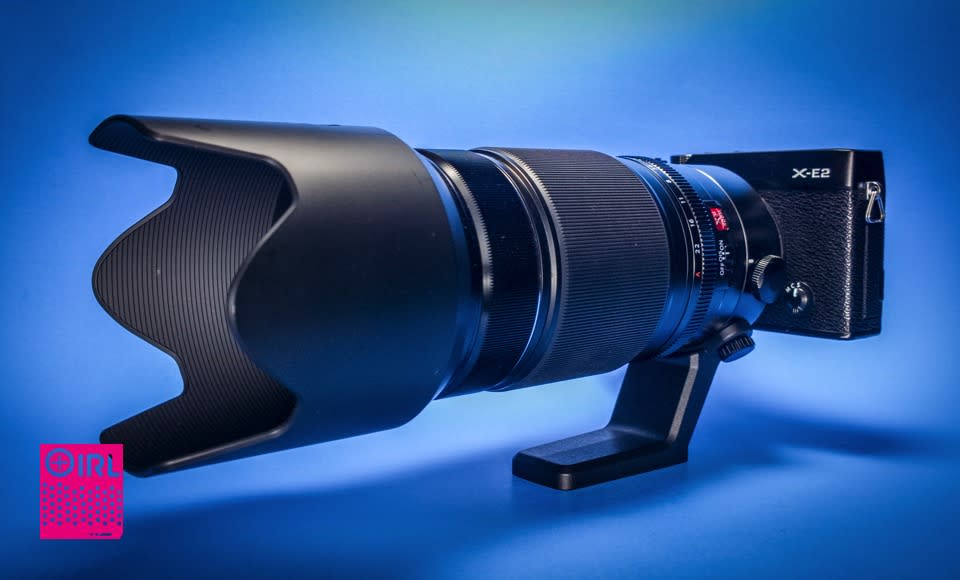 Fujifilm may still be a relatively niche player in the mirrorless camera field, but that's not stopping the company from putting out some serious lenses to go along with its well-regarded X-series cameras. With the $1,600 XF50-140mm zoom, Fuji's hoping to provide a professional-level, weather-sealed telephoto zoom that can compete with the legendary 70-200mm lenses from companies like Nikon and Canon. I spent a month with the lens to see how close the company came. First, the full name: It's the Fujinon XF50-140mm f/2.8R LM OIS WR lens. Break out your decoder rings and you'll find we're dealing with a telephoto zoom with a constant max aperture of f/2.8, an aperture control ring (R) and Fuji's "Linear Motor" (LM) for quieter focusing. Also on board: five-stop optical image stabilization (OIS) and weather-resistant (WR) construction. Build quality is unsurprisingly solid: Fuji's XF lenses generally make heavy use of metal and textured rubber. Each of the three control rings move smoothly -- save for the aperture selector, which features distinct, reassuring notches throughout its range of motion. At the front end, you'll find threads for 72mm filters and a bayonet-style attachment for the substantial lens hood. While the all-plastic hood is the only significant component that's not high-quality metal or rubber, it at least has a slide-out tab so you can control mounted circular polarizers more easily.

On the other end, you'll find an all-metal (surprise!) lens mount surrounded by a rubber gasket -- part of the lens' weather-resistant design. Of course, to take full advantage of that protection, you'll likely want a similarly robust camera body like the X-T1. Like the workhorse Canon and Nikon zooms it emulates, the 50-140 has a rotating and removable tripod collar allowing for better balance when mounted on a tripod. Of course, if you flip it around to the top, it makes for a nifty carrying handle as well. As for the specs, Fuji says the 50-140mm range on its APS-C camera bodies gives users an angle of view (31.7 degrees down to 11.6 degrees) that's broadly similar to what you'd get on Canon's or Nikon's full-frame bodies with their respective 70-200mm optics (about 34 degrees down to 12 degrees). Naturally, that comparison doesn't hold when you're using a 70-200 lens on a smaller APS-C DSLR, but it's still an eminently useful focal range.

Image quality is fantastic throughout regardless of focal length, with pleasingly sharp details and accurate focus. Without Fuji's current speed king, the X-T1, I wasn't able to test out the upper end of its autofocus abilities, but it performed quickly enough on my trusty X-E2. As for bokeh, out-of-focus background elements were generally smooth and not distracting, meaning this should be a solid portrait lens if that's your thing. It also pairs well with Fuji's new macro extension tubes, enabling focus as close as 80mm (about three inches) from the front of the lens rather than the normal 800mm. This let me get up close and personal with some hungry hummingbirds. Fuji's onboard image stabilization feature let me hand-hold shots at far slower speeds than I'd normally be capable of. You can hear a faint hum emanating from the lens when the camera powers on, but it shouldn't be too distracting.

In the end, did Fuji succeed in emulating that "classic" telephoto zoom lens SLR shooters have been enjoying for years? Pretty much, yeah. I've been lucky (foolish?) enough to have owned both a Canon 70-200mm f/2.8L IS and Nikon's 70-200mm f/2.8 ED VR. They remain two of my favorite lenses, and the XF50-140 compares very well in image quality as well as overall build.

At $1,600 and around 1kg, it's both cheaper and lighter than those DSLR lenses. Heck, if you attached an X-T1 to it, you'd still be around the same weight as those lenses without cameras attached. And you'd likely need that high-end X-T1 -- with its weather-resistant body and improved autofocus -- to get the most out of this lens. If you like that focal range but don't require such heavy-duty glass, there's always Fuji's well-built XF55-200 f/3.5-4.8 optic. It's less than half the price and may be all you really need. But if you're convinced you need to pay the premium, you won't be disappointed.

In this article: engadgetirl, Fuji, Fujifilm, fujinon, irl, lens, lenses, uk-feature, ZoomLens
All products recommended by Engadget are selected by our editorial team, independent of our parent company. Some of our stories include affiliate links. If you buy something through one of these links, we may earn an affiliate commission.