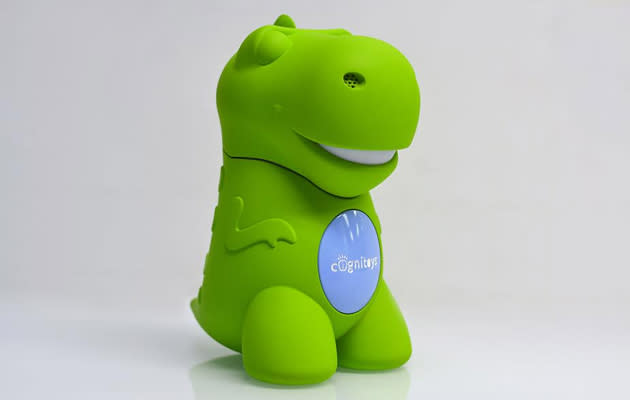 Talk about machine learning and toys in the same breath and it's hard not to imagine a deranged AI grooming an army of children to take over the world. We're reasonably sure that's not Elemental Path's plan, despite teaming up with IBM to develop a toy that uses machine learning to interact with your child. Today, the company is announcing CogniToys, a new range of little plastic monsters that harness the power of Watson, IBM's supercomputer, to help your little ones learn.

First in the line is GreenDino, and on the surface it resembles the sort of fun you have in the first hour of playing with Siri. Push the large button on the belly, ask a question and Watson, sorry, GreenDino, will come back with the answer. Since there's an educational element here, the creature promises to teach your kid to spell, count and even swell their vocabulary. Elemental Path's pitch here is that, as your child ages, the toy will monitor their progress and ask more sophisticated questions and provide more detailed answers.

Of course, IBM's involvement in the project is purely to let the company connect to Watson Developer Cloud, one of the ways in which big blue hopes to make money from its supercomputer. The pair are hoping that you'll bankroll the $50,000 initial production run by donating via Kickstarter. If you want to grab a unit for your munchkin (aged four to seven), you'll have to cough up $99, although the first 200 customers can snag a $10 discount, with delivery expected to begin in November.

Oh, and by the way -- giving a child's toy the voice of a 200-a-day smoker is in no way creepy.We've been reassured that, in the flesh, the voice sounds a lot more like Cookie Monster and less like a regular Monster. Apparently, the thinking behind the voice is, rather than a Siri-style voice that would wander into the uncanny valley as it mispronounced complex names, a cartoonish voice is a lot easier to handle.

In this article: CogniToys, IBM, ToyFair2015, video, Watson, WatsonDeveloperCloud
All products recommended by Engadget are selected by our editorial team, independent of our parent company. Some of our stories include affiliate links. If you buy something through one of these links, we may earn an affiliate commission.