Google's Nest Hub could be your next hotel concierge

Airbnb Luxe offers castles, villas and islands for $1,000 per night 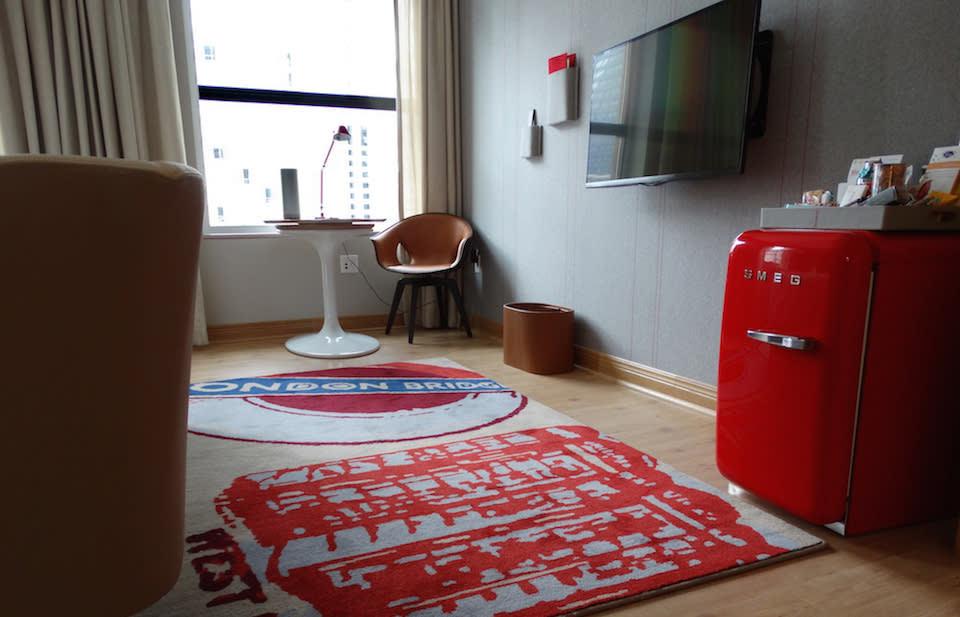 Richard Branson knows how to make a first impression. The first thing I saw when I arrived at Virgin's debut hotel was a statuesque blonde in a bright-red trench coat stepping out of a matching-hued Tesla, with a photographer documenting the whole ordeal. The photographer was there for glamour shots, naturally, and the Model S serves as the hotel's house car that'll drop guests off anywhere within a 2-mile radius. However, it wasn't in service just yet. Virgin bills the hotel as "brilliant," and to see just how smart it actually was, I spent a night in the premiere Chicago location. Given that the inn is run by the same company that wants to make us all space tourists with Virgin Galactic, I suppose I shouldn't have been surprised by anything during my stay -- least of all, an electric sports sedan waiting out front. 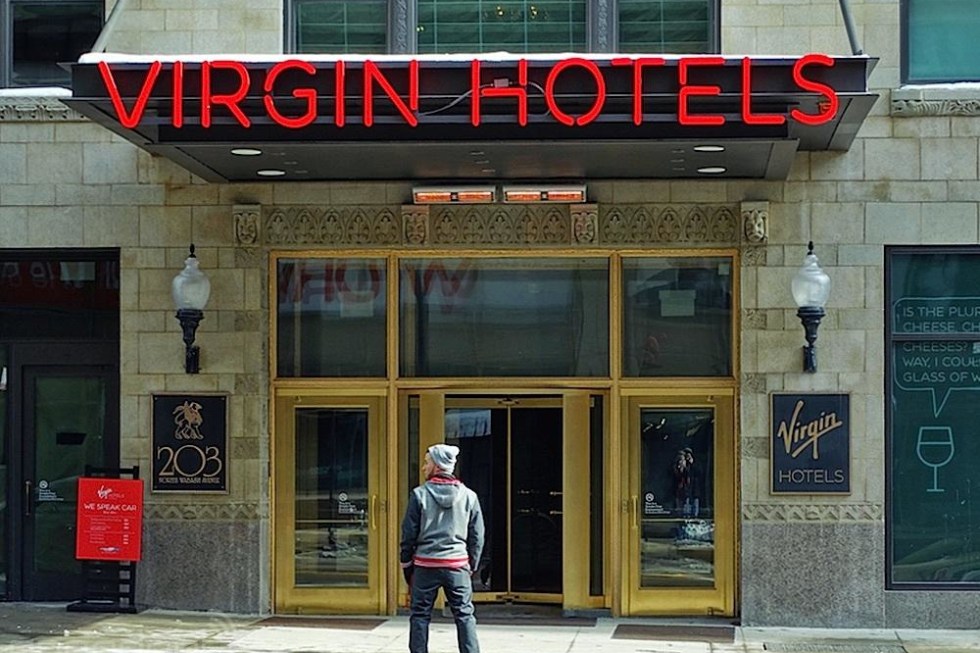 With Virgin Hotels, you set your own check-in time and there's no rigid check-out deadline.

What sets Virgin Hotels apart from other lodging options is a lot like what separates Virgin America from its airline competitors. Male and female employees alike are young, attractive and dapper, and there's a keen focus on using tech and charm to make the whole experience less stressful and more customer-friendly. For starters, with Virgin Hotels, you set your own check-in time and there's no rigid check-out deadline. "Use your discretion," the iPad-wielding front-desk attendant told me.

This, I learned, is to make it easier if your flight is delayed, for example. As a third-shifter, it caught me off guard; it felt tailored to me. I wouldn't have to scramble out of bed and possibly leave a phone charger or other gadget behind in my rush to make it to the front desk before 11 AM this time.

The customer-first approach doesn't stop there. When making a reservation either online or via a mobile app dubbed "Lucy," (more on that later) there's an option to take a quick survey about your interests and your stay. It takes all of five minutes and, like Virgin's pre-flight safety video, it's quite cheeky. Plan on traveling with a bedside companion? What's their relationship status to you: married, dating, "friends" or it's complicated? Are you bringing kids along? If so, The Know wants an idea of their favorite food. Same goes for any canine cohorts; yes, Virgin Hotels are dog-friendly. Additionally, the questionnaire also asks for your dream minibar item and snack in addition to favorite band and music genre. Oh, and speaking of snacks, all minibar items are set at street prices; a Red Bull will run you $2 -- not $10. Virgin's first hotel is located in Chicago's The Loop district.

When I stepped inside the doors at 203 N. Wabash, it felt like walking into one of Virgin America's airport terminals. There wasn't any purple, neon mood lighting, but there were dance remixes of pop music playing over the PA and a gaggle of smartly dressed, smiling attendants armed with Apple's tablets eager to get me checked in and learn who I was. Rich red carpeting, meanwhile, was everywhere I looked, from the stairwell leading to the second-floor bar to the walls of the elevators.

The hotel literally stands in the shadow of the hulking Trump International a few blocks away, but despite the Virgin's conveniences, similar rooms actually undercut the competition in price. Whereas a room at the Trump commands anywhere from $445 and up at weekend rate, my spot at Virgin cost $275. It's pretty clear that these are early days for the hotel, though. The premiere Chicago location had been open all of three weeks during my stay and I was told that of the nearly 90 rooms available, they were only running at 20 to 30 percent capacity on a given night. Everything was still getting broken in, from the touchscreen-based check-in stations at the front desk to the staff.

In addition to the Tesla drop-off service, other aspects of the hotel weren't up and running yet either. That includes the in-house, American-diner-styled Miss Ricky's, Two Zero Three (a coffee shop by day/wine bar by night) on the ground floor and the aptly named Rooftop Bar. I was told these should be fully operational come the hotel's grand opening in April.

Hopefully that extends to Lucy, too. The video above shows the app as capable of doing everything, from making a reservation to checking out, and everything in between. In theory, you could set the room to a toasty 74 degrees, and have a burger waiting and your favorite tunes playing once you got back after doing some sightseeing. In practice, however, it's a different story. For starters, when I tried booking via the iOS app (it's available on Android as well), it sputtered and the reservation section wouldn't load, so I was forced to do it on my laptop.

When I tried booking via the iOS app, it sputtered and the reservation section wouldn't load, so I was forced to do it on my laptop.

What's more, I'd answered The Know's questions the night before and had already forgotten my login for that by the time I'd booked. When I went to reset my password via email, I was told that my @engadget.com domain wasn't supported and I'd have to call for assistance. Instead of doing that, though, I left a note on my reservation of what happened, asked for my account to be applied to my room and hoped for the best.

When I checked in at the front desk with Lucy, I got a dreaded message that there wasn't a reservation under my name. I panicked, but it turns out that my room simply wasn't ready even though I got there at the time I'd listed when booking. The staff apologized profusely and offered me another room on a higher floor. Were the hotel operating at full capacity, I'm not sure how this would've worked -- especially given the whole "no check-out deadline."

Virgin red follows into the rooms themselves. Entry doors, rugs, the Smeg mini fridge and other accents all bear the fiery hue, while neutral laminate wood flooring rests underfoot. Each room (or "chamber," as they're officially called) is divided into two sections: a spacious dressing room with two vanities, twin closets with motion-activated lighting, a shower stall and a commode. The idea is to give you privacy and separate your sleeping area from the spot where you take your room service. That peculiar corner piece on the bed acts as a chaise lounge of sorts.

Beyond a set of sliding privacy doors is the bedroom with a king-size mattress (or two fulls), and a swiveling desk adorned with a red lamp and Stellé Audio Bluetooth speaker. In-room WiFi was the fastest I've seen at a hotel, with the Ookla Speedtest recording 20.95 Mbps downloads and 26.20 Mbps uploads. In contrast, everywhere else I've stayed has struggled to break single digits with free internet. Just as Ookla was finishing its evaluation, a bellhop knocked, delivering the Gosling's I'd spied on at the front desk. Voila.

Power outlets are where you need them, too. They aren't tucked away by a baseboard; they're in full view so you can plug your devices in on either side of the bed. I half-expected them to have USB ports in addition to the standard three-prong plugs, but that wasn't the case. The one near the desk is where things get interesting, though: There's an HDMI input and an Ethernet port. This is to plug your laptop into so you can watch your own media on the TV if the video-on-demand options don't suit you.

Should you forget to grab the clicker from its pouch on the wall, Lucy's got your back there as well because she acts as a TV remote. You can't order room service directly from the app yet, though; for now, you need to either pick up the phone or place your order from the wall-mounted, 40-inch LG flatscreen. So, technically you're using the app, but the experience isn't quite what's promised. Speaking of which, this is where the entertainment options like custom playlists reside. How'd my challenge fare? Not so great. The tailored playlist featured electronic dance music (EDM), but that's not the same as hardstyle. Compared to Virgin America's seat-back entertainment systems, the selection was lacking, too. There was no Taylor Swift, Chemical Brothers or Nirvana (I have diverse taste, okay?), but I had Coldplay, Adele and Avicii to choose from in addition to Katy Perry's Teenage Dream, among others. Thankfully, the Stellé audio tower had enough oomph to kick out the jams from Google Play Music on my iPad mini 2.

For all of its advances and modern motives, though, Virgin Hotels still has a foot in the past and Lucy just isn't capable enough yet. My room came with English breakfast, for example, but you have to fill out a tag for egg and toast preferences and leave it hanging on the door the night before. I sleep exclusively on the left side of beds, so I missed the tag because it was sitting on the mattress' right-side nightstand. I'd figured this would be handled by the app given Branson's futuristic ideas.

Tech like Philips Hue smart lighting systems and Sonos' popular wireless music systems are quickly becoming mainstream too, so you'd think those would be standard at Virgin's hotel -- they're app-controlled, after all -- but that isn't the case either. I liked using the app to control room temperature and fan speed, but let's face it: That's the sort of thing you typically only do once. What's more, there really wasn't a need to order more towels or anything via the app either because the room was pretty well-stocked. Lucy feels more superfluous than actually useful for now, a bit of a gimmick that'll hopefully be expanded upon soon. The Commons Club where, from 6 PM to 7 PM every night, drinks are on the house for hotel guests.

Despite those niggles, I couldn't shake the feeling that this could be the future of hotels. It isn't so much a technical revolution (though that foundation is in place), but one focusing the experience on the customer. Every hotel where I've stayed for work has always felt archaic, impersonal and cold, aiming to nickel-and-dime at every turn for what should be standard options. From the nightly hour-long open bar for guests and the reliable WiFi, to the desk staff that remembered my name and where I was traveling from, my night felt, well, inviting. It should be something that's industry standard, but sadly isn't. Like taking a cross-country flight with Branson's airborne baby, my stay at Virgin Hotel actually made me look forward to my next visit -- not dread it. That's a future I can get behind.

In this article: hotel, hotels, travel, uk-feature, virgin, virginhotel
All products recommended by Engadget are selected by our editorial team, independent of our parent company. Some of our stories include affiliate links. If you buy something through one of these links, we may earn an affiliate commission.