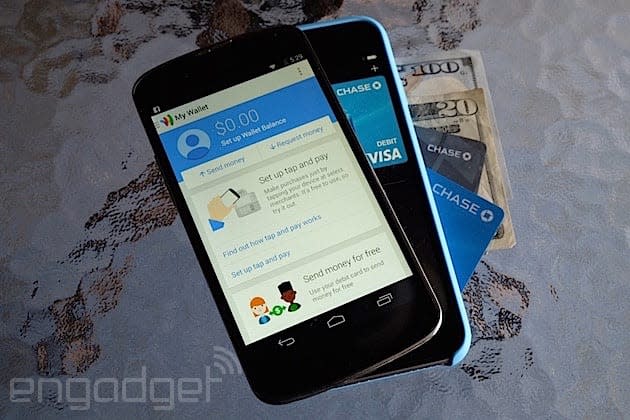 In an ironic turn, Google is now partnering with AT&T, Verizon and T-Mobile to bring its Google Wallet mobile payment app to their Android phones later this year. Yes, those are the same carriers who made life pretty difficult for Google with their own payment solution, Softcard (formerly called Isis). The real point of this deal: Wallet will be pre-installed on Android phones running KitKat or higher, which makes it far more likely that people will actually use it. Google's also acquiring some technology and intellectual property from Softcard, though it's unclear what exactly it's getting. Sure, it feels as if we're in the mobile payments Twilight Zone -- Softcard was the main reason Google couldn't bring Wallet to every single Android phone. But now that Apple Pay is taking off (even the US government wants in on the action), and Samsung is gearing up for its own wallet by buying LoopPay, Google has to do something to rev up its own mobile payment action. And that starts with making Google Wallet a default feature, rather than being an app people have to discover and install on their own.

TechCrunch reported back in January that Google was in talks with payments outfit, so the news doesn't come as much of a surprise. Softcard says its existing users will still be able to pay for things with its app, but it's only a matter of time until they get pushed toward Google Wallet.

In this article: att, google, googlewallet, mobile payments, mobile wallet, mobilepostcross, softcard, t-mobile, verizon
All products recommended by Engadget are selected by our editorial team, independent of our parent company. Some of our stories include affiliate links. If you buy something through one of these links, we may earn an affiliate commission.