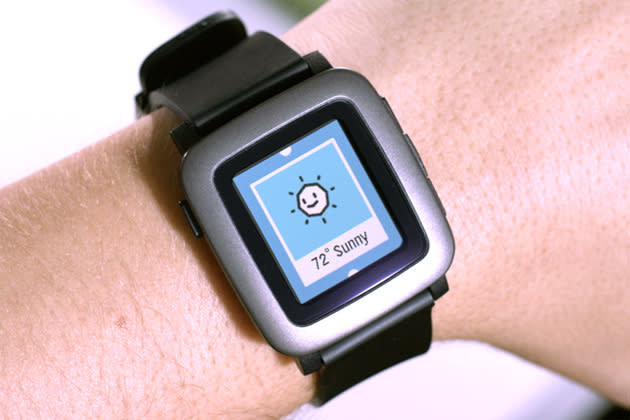 If you followed the Kickstarter launch of Pebble Time, you probably noticed that the smartwatch got funding very quickly. It met its $500,000 goal in just 17 minutes, and hit the magical $1 million mark in about half an hour. But are any of those records? Well, yes -- Kickstarter has confirmed that the color-screened wearable is the fastest-ever project to reach $1 million on its crowdfunding service. For reference, even the fan favorite Veronica Mars movie took 4.2 hours. The original Pebble took 27 hours to hit that milestone, which sounds positively glacial in comparison.

The feat isn't completely surprising, of course. The original Pebble watch was already a Kickstarter darling and has a substantial presence in stores, so it has no shortage of fans. Combine that with hefty feature upgrades and a burgeoning (if still small) smartwatch market, and it would have been surprising if Pebble Time didn't break at least one or two records. It's still too soon to know if this will be Kickstarter's highest-grossing project ever, but that's no longer an outlandish idea.

Update: We reached out to Kickstarter after it became clear Pebble Time was on fire, and it's clarifying things a bit. It says that Pebble technically took 49 minutes to cross $1 million. That's still a record by any stretch, since the previous best (Reaper Miniature Bones) took 2 hours, 42 minutes to achieve the same feat.

Pebble is the fastest project to ever raise $1 Million on Kickstarter. ~30 minutes: https://t.co/bUWViWal6a @Pebble @ericmigi

In this article: crowdfunding, kickstarter, pebble, pebbletime, record, smartwatch, watch, wearable
All products recommended by Engadget are selected by our editorial team, independent of our parent company. Some of our stories include affiliate links. If you buy something through one of these links, we may earn an affiliate commission.