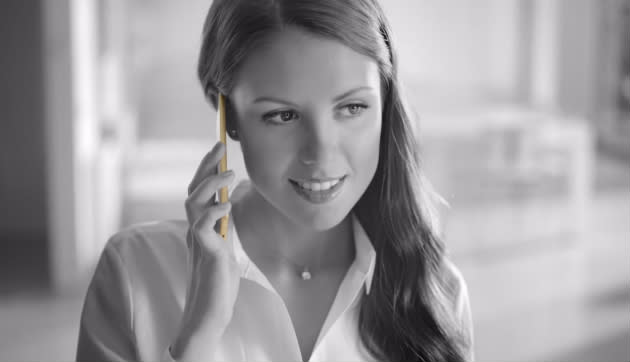 Kazam is hardly a well-known smartphone brand in the UK, and that's unlikely to change any time soon if its ads are being pulled from TV. After a series of complaints, Britain's Advertising Standards Authority (ASA) has banned an ad for the company's Tornado 348 handset, ruling that it objectifies women and is "sexually suggestive." The clip shows a woman moseying around in her underwear, grabbing a pair of jeans and ironing a shirt, only to discover that she'd forgotten to take her smartphone out of the top pocket.

The ASA criticized the numerous close-up shots that "lingered over her breasts, buttocks and lips," as well as the suggestive backing track and voiceover. In response, Kazam said the ad played on a well-known scenario and was only shown during TV broadcasts that attracted an appropriate audience. That obviously wasn't good enough for the ASA, and its decision means the ad can't be broadcast again in its current form. Kazam could try recutting it so as to comply with the ASA's guidelines, but it's hard to see how any amount of editing could drastically change the tone of the advert.

Had Kazam focused on the actual product, this entire situation could have been avoided and one of its ads might still be running on TV, giving the firm some much-needed exposure in the UK. Hopefully it's learned its lesson, eh?

In this article: ad, advertisement, advertising, advertising standards authority, AdvertisingStandardsAuthority, asa, kazam, kazamtornado348, tornado348
All products recommended by Engadget are selected by our editorial team, independent of our parent company. Some of our stories include affiliate links. If you buy something through one of these links, we may earn an affiliate commission.