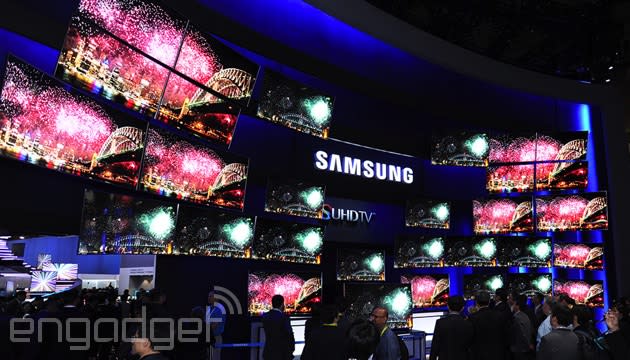 The Electronic Privacy Information Center (EPIC) wasn't convinced when Samsung explained that its smart TVs aren't actually eavesdropping on people. In fact, the privacy group has just asked the Federal Trade Commission to investigate whether the South Korean company has really been recording people's living room convos. If you recall, Samsung stirred up controversy earlier this month due to the phrasing of its privacy policy, which stated that "some voice commands may be transmitted (along with information about your device, including device identifiers) to a third-party service that converts speech to text or to the extent necessary to provide the Voice Recognition features to you." The outcry that ensued forced Samsung to clarify that its smart TVs can only hear what you say if you push a designated button.

While "listening" to spoken words is par for the course for a device that uses voice commands, EPIC believes it still warrants an investigation. "The key point is that Samsung is not just recording voice commands to operate the TV, as many would expect," EPIC director Marc Rotenberg told The New York Times. "The company is capturing all voice communications, including conversations between people in the room."

In the official document it filed, the group wrote:

This complaint concerns certain business practices of Samsung Electronics, Ltd. that adversely impact consumer privacy in the United States. As set forth in detail below, Samsung routinely intercepts and records the private communications of consumers in their homes. Consumers who have learned of this practices have described it is as both "unfair" and "deceptive." Samsung's attempts to disclaim its intrusive surveillance activities by means of a "privacy notice" do not diminish the harm to American consumers. It is incumbent upon the Federal Trade Commission to take action in this matter, and to enjoin Samsung and other companies that engage in similar practices, from such unlawful activities.

In addition, the privacy group says Samsung violated the FTC Act by claiming it encrypts voice recordings before sending them to third-party services. The company admitted later on that it doesn't actually encrypt recorded voice commands or their transcriptions. EPIC also accuses Samsung of violating the Children's Online Privacy Protection Act, which prohibits collecting information from minors. The group has compiled all its complaints against the electronics company, along with comments from researchers, journalists, ordinary internet users and other privacy advocates in its official investigation request.
In this article: ftc, privacy, samsung, SmartTvs, VoiceCommand
All products recommended by Engadget are selected by our editorial team, independent of our parent company. Some of our stories include affiliate links. If you buy something through one of these links, we may earn an affiliate commission.