'Danganronpa 3' brings the weirdness to both PS4 and PS Vita

Robear is a robot bear that can care for the elderly 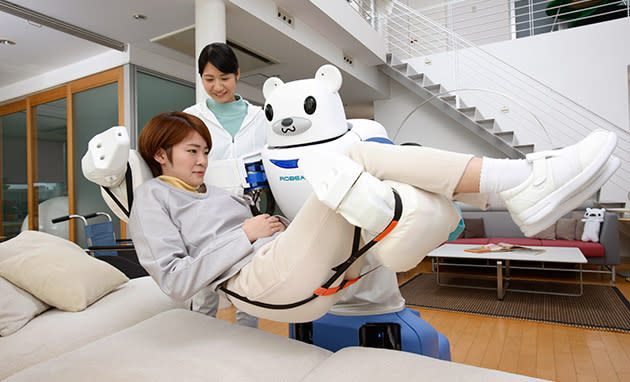 It's 2024. An older Japanese gentleman wants to watch the International Space Station's closing ceremony, but he can't get out of bed. No problem! All he has to do is call Robear to help him get up. Yes, that's his caregiver's name, but you see, Robear isn't human: it's a bear-like robot. This machine is actually the third and latest iteration of the beary helpful caregiver robot being developed by Japanese research institute Riken. The first model announced in 2009 was called RIBA, followed by RIBA-II in 2011, though Riken also came out with a Pillsbury Doughboy-like model way back in 2006 called RI-MAN. Robear weighs 309 pounds, making it a lot lighter than its 507-pound predecessor. It also has new features that ensure it's gentler and more careful while carrying patients to/from their beds or wheelchairs than the older versions.

Specifically, it includes actuator units with a very low gear ratio, allowing the joints to move very quickly and precisely, and allowing backdrivability, meaning that the force encountered by the actuators as they perform their tasks can be quickly fed back into the system, allowing softer movement. It also incorporates three types of sensors, including torque sensors and Smart Rubber capacitance-type tactile sensors made entirely of rubber, which allow for gentle movements, ensuring that the robot can perform power-intensive tasks such as lifting patients without endangering them.

The institute is hoping that its creation can help people, particularly the elderly, regain some independence, as it gives them the power to move around the house without another person's assistance. For Japan, which has an aging population, a robot carer doesn't sound like such an outrageous idea, even if it does look a bit like a homicidal bear.

In this article: DANGANRONPA, Japan, riba, riken, robear
All products recommended by Engadget are selected by our editorial team, independent of our parent company. Some of our stories include affiliate links. If you buy something through one of these links, we may earn an affiliate commission.