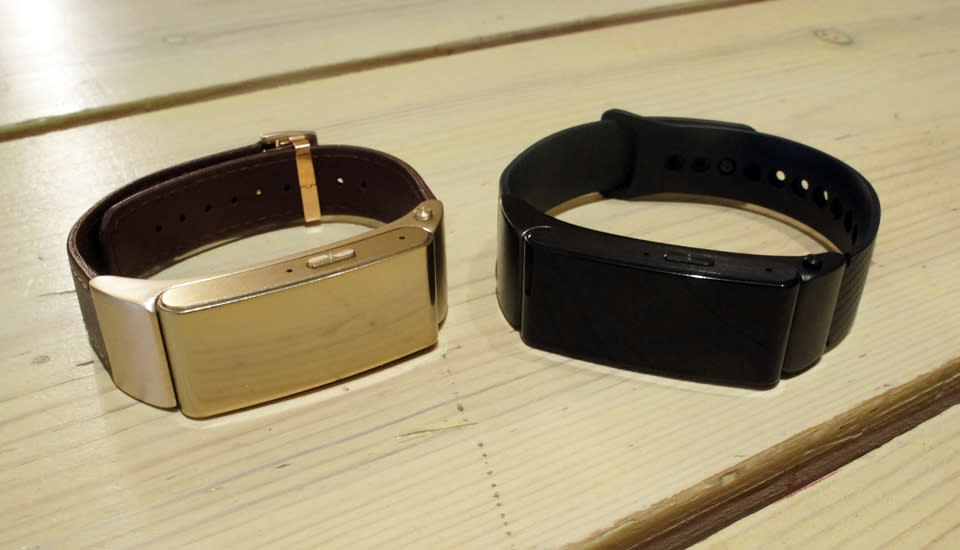 So many companies are afraid to do something different, so we have to give props to Huawei for persisting with its wrist-worn Bluetooth earpiece. Last year's TalkBand B1 was unconventional, but it wasn't the most elegant or stylish device ever designed for a forearm. Thankfully, a year after the original launched, the company has given the updated TalkBand B2 a fashion-conscious makeover as well as a few more substantial tweaks under the hood. If you recall, last year's model featured rounded, chunky rubber, but the B2 is squared off and, by comparison, a lot thinner. Unlike the primary colors of the B1, users will now get a choice of black, silver or champagne gold, the latter of which comes with a brown leather strap rather than the rubber of the first two. In addition, you can't just pull the earpiece out of the case anymore: Instead you'll have to press two buttons to pop it out. The downside of that, of course, is that the strap is no longer used for charging, so you'll have to plug your micro-USB lead into the back of the hardware directly.

Good looks count for nothing unless there's some value beneath the surface. This time, the company has vastly improved the motion tracking, in addition to making the B2's display a touch surface. Now, users will be able to swipe through screens showing the time, as well as a stopwatch, sleep tracker, pedometer and calorie monitoring. If you're flash enough to have a work and personal phone on your person, the B2 will also let you pair both devices at the same time. Battery-life wise, the TalkBand B2 will give you seven hours of talk time or five days as an activity tracker. Android and iOS users will be able to use the device on any smartphone with the companion app and, while there's no word on pricing, it's reasonable to assume it'll be close to the B1's launch fee of €99. It's probably clear that if you opt for the champagne gold and leather edition, however, it'll probably go for a little more. UPDATE: We've just learned that the standard TalkBand B2 will retail for €179 while the premium edition is priced at €199. The company is also whipping out the TalkBand N1, a Bluetooth headset and music player for the fitness market. The hardware is designed to offer some basic fitness tracking and hold 1,000 songs thanks to the 4GB of onboard storage. Details for the N1 are still reasonably scarce, but you can expect it to retail for less than £200 in Europe and it will be available in gold, gray or metallic pink. UPDATE: A few more details about the N1 have surfaced. It'll provide voice notifications of the number of steps you've taken and the percentage of progress towards your goal. Huawei says it's very lightweight, weighing less than 18 grams, and has about a 7 hour battery life. As you might expect, the headset is also sweat, water and dust resistant. Of course, it wouldn't be Mobile World Congress without some, you know, mobile phones, but those looking for a new Huawei flagship will be disappointed. This year, the company is happy just to refresh a pair of low-end handsets for another year on store shelves. First up, the Y360 will supplant the Y330; the cheap 3G device gains an updated processor, forward-facing camera and a bigger battery. If you're on the hunt for a 4G device instead, the Y635 will bump the Y550 with its slightly larger display and an upgrade to Android 5.0, albeit skinned with Emotion UI.

In this article: hands-on, Huawei, HuaweiY360, HuaweiY635, MWC2015, TalkBandB2, TalkBandN1, Y360, Y635
All products recommended by Engadget are selected by our editorial team, independent of our parent company. Some of our stories include affiliate links. If you buy something through one of these links, we may earn an affiliate commission.