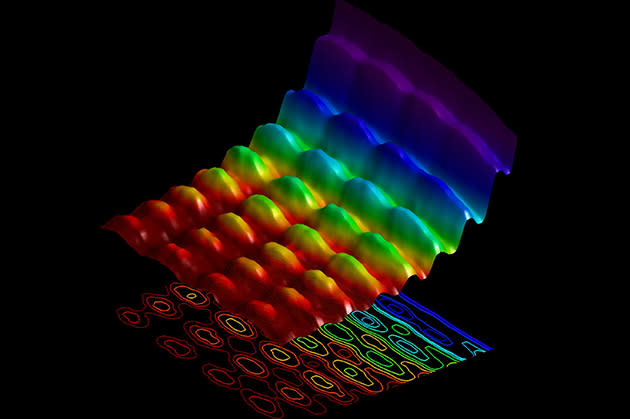 You've likely read in a textbook before that light behaves both as a particle and a wave at the same time. Scientists had previously seen it behave one way or another, but it's only now that someone finally found a way to photograph light as both in a single picture since Einstein proposed its dual nature in the early 1900's. In order to photograph light, a team of scientists from the Ecole Polytechnique Federale de Lausanne (EPFL) used a novel technique and an electron microscope so powerful, there are only two in the world.

Here's how they did it: they shone laser onto a tiny nanowire that caused it to vibrate, which, in turn, caused light waves to travel back and forth along its length -- when the waves met, they ended up emitting light particles. The team then fired electrons close to the nanowire that enabled them to capture both the light waves and particles, as you can see in the image above. Sound complicated? The video below makes it easier to understand, but take note that it's still the shorter, oversimplified explanation. If you want the whole enchilada (and all the scientific lingo that comes with it), you'll have to read the team's paper published in Nature.

In this article: EPFL, light, physics, QuantumMechanics
All products recommended by Engadget are selected by our editorial team, independent of our parent company. Some of our stories include affiliate links. If you buy something through one of these links, we may earn an affiliate commission.