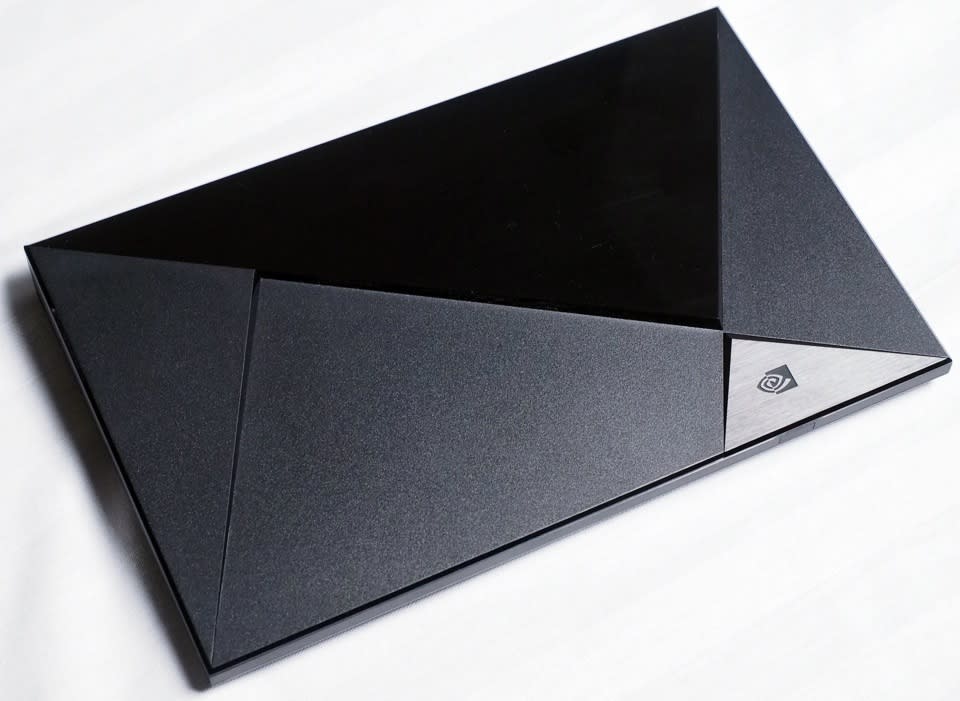 Another year, another new Shield device from NVIDIA. What's Shield? It's the hardware line from NVIDIA that spans a bizarre handheld game console, a powerful gaming tablet, and now a $200, Android TV-powered set-top box. NVIDIA CEO Jen-Hsun Huang unveiled the Android TV-powered set-top box this evening during a GDC 2015 press conference, which the company referred to as a combination "revolutionary TV", "gaming console" and "supercomputer." Head below for all the specs as we learn them live from NVIDIA.

NVIDIA's calling Shield the "world's first 4K Android TV" -- it's able to both stream and locally run 4K content to your fawncy 4K television. How does it do that? It uses a bleeding edge X1 chip -- the most powerful mobile processor NVIDIA's made to date. Shield also has voice control, which works both via the Shield gamepad's mic and a separate remote control (like Amazon Fire TV's remote control). Huang demonstrated as much on stage with a false pickup on whether or not Justin Bieber died. Or as he meant it to come out "What's the song that he did?"

Beyond the set-top box capabilities, NVIDIA's aiming Shield directly at gamers. The company calls its box "more than 35 times more powerful than the next set-top box" -- and more importantly, double the performance of an Xbox 360 (at least on paper).

There are a ton of bigger games from console getting ported to Android solely for use on NVIDIA Shield: Borderlands: The Presequel, Doom 3: BFG Edition, The Talos Principle, Metal Gear Solid: Revengeance, and more. We've got more information on that right here. Beyond that, there's a whole wealth of already existing Android games available as well -- what you'd expect from any Android TV set-top box, honestly. Huang says at least 50 games will be available at launch. So, how about that third component of tonight's presentation: the supercomputer bit? That apparently comes along with NVIDIA's GRID subscription-based game streaming service -- Huang's saying the Shield essentially has access to a supercomputer in the cloud.

What does this mean for you, potential Shield owner? It means you can subscribe to NVIDIA's soon-to-launch GRID game streaming service and play high-powered PC games locally that are being played remotely on a far more powerful machine.

Interested? There are two subscriptions to GRID: a free one (which enables paid game rentals and purchases) and a paid one that enables an all-you-can-play subscription model. The service will launch alongside the console later this year. At least one version of the stream will run in 1080p, 60 frames-per-second; if all this sounds familiar, that's because the GRID service has existed for several years now. It looks like GRID is coming out of beta with the Shield set-top box.

When the device launches this May, it will cost $200 and come with an NVIDIA Shield gamepad as well as the set-top box itself.

In this article: gdc, gdc2015, google, hdpostcross, nvidia, nvidiashield, shield, x1
All products recommended by Engadget are selected by our editorial team, independent of our parent company. Some of our stories include affiliate links. If you buy something through one of these links, we may earn an affiliate commission.