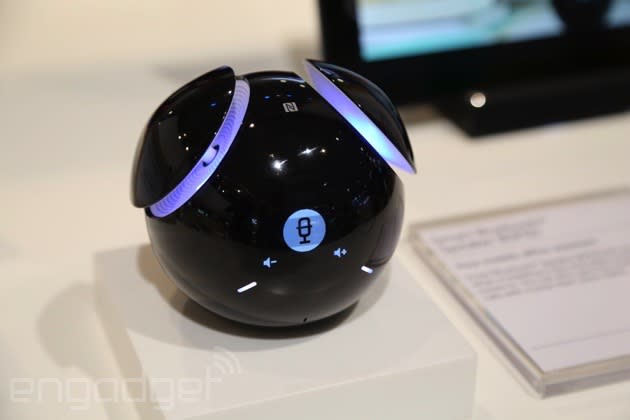 The jury is still out on Amazon's voice-controlled Echo speaker, but that hasn't stopped Sony from developing a competitor. The 'Smart Bluetooth Speaker BSP60' is a petite black orb that pairs with Android devices and vocalizes basic information, such as the weather forecast and your daily schedule. Once triggered with the phrase "okay speaker," you can ask it to perform simple tasks too, such as setting timers, alarms and checking your phone for new messages. The built-in microphone accommodates conference calls and the tiny wheels underneath allow it to scoot around a flat surface, similar to the Sony Rolly. (Try snoozing that 6am alarm now...) By far its most eye-catching feature, however, are the twin sections that pop out of the top. The device then looks like a Tron-style alarm clock, with bright lights that change color underneath. They're mostly for show, but give Sony's speaker a charming little personalty. If you're interested, be prepared to shell out some serious cash -- Sony says it'll cost €299 ($355) when it debuts in Q2 2015. 5
In this article: Android, bluetooth speaker, sony, sony rolly, Voice Commands, voice control, VoiceRecognition
All products recommended by Engadget are selected by our editorial team, independent of our parent company. Some of our stories include affiliate links. If you buy something through one of these links, we may earn an affiliate commission.