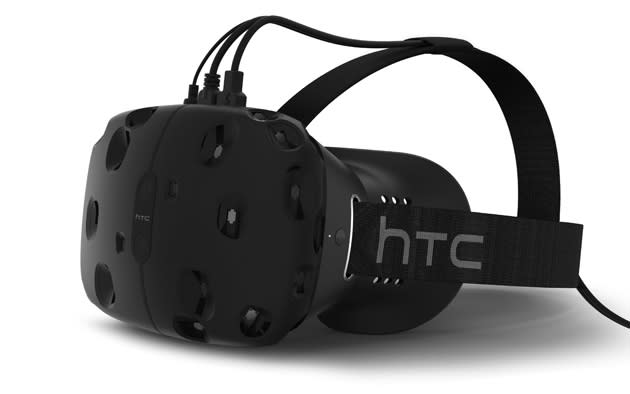 We already saw the new Vive virtual reality headset that Valve and HTC are working on, but they're not stopping there. Hardware engineer Alan Yates says that its Lighthouse room-scale tracking system brings the "high-resolution, high-speed tracking" that you need for a quality VR experience. According to Yates, the system is cheap enough to integrate into TVs, monitors, headsets, input devices or mobile devices. There's not a lot of detail on what exactly it includes, but it sounds a lot like the extra LEDs Sony just revealed on its new Project Morpheus prototype, and its PS Move controller. Those let the system track it with a camera to see how the wearer is moving in greater detail. Valve will make Lighthouse available to hardware manufacturers "freely," and we'll probably be looking for VR-ready stickers on our next TV or monitor.

Don't miss out on all the latest from GDC 2015! Follow along at our events page here.

Valve will show a virtual reality (VR) headset. Developer versions of the headset will be available this spring, and partner HTC will ship their Vive headset to consumers by the end of the year.
Two new technologies are part of the VR release - a room scale tracking system codenamed Lighthouse, and a VR input system. "In order to have a high quality VR experience, you need high resolution, high speed tracking," said Valve's Alan Yates. "Lighthouse gives us the ability to do this for an arbitrary number of targets at a low enough BOM cost that it can be incorporated into TVs, monitors, headsets, input devices, or mobile devices." Valve intends to make Lighthouse freely available to any hardware manufacturers interested in the technology.
"Now that we have Lighthouse, we have an important piece of the puzzle for tackling VR input devices," said Valve's Joe Ludwig. "The work on the Steam Controller gave us the base to build upon, so now we have touch and motion as integrated parts of the PC gaming experience."
"We've been working in VR for years and it was only until we used SteamVR's controllers and experienced the magic of absolute tracking that we were able to make the VR game we always wanted to make," said Alex Schwartz of Owlchemylabs.
VR demos being shown at GDC include work from Bossa Studios, Cloudhead Games, Dovetail Games, Fireproof Studios, Google, Owlchemylabs, Skillman & Hackett, Steel Wool Games, Vertigo Games, and Wevr.

In this article: GDC2015, hdpostcross, lighthouse, valve, virtualreality, vive, vr
All products recommended by Engadget are selected by our editorial team, independent of our parent company. Some of our stories include affiliate links. If you buy something through one of these links, we may earn an affiliate commission.