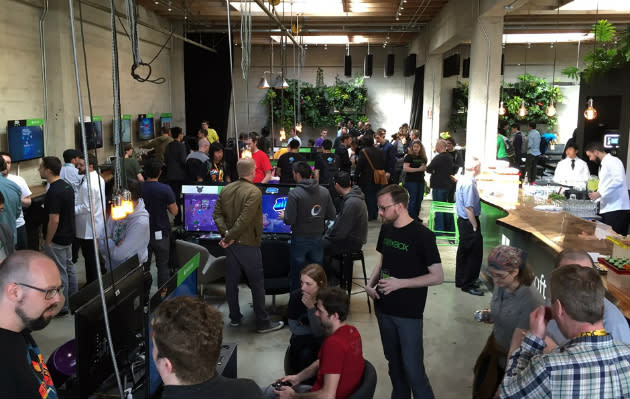 Not to be outdone by Nintendo's upcoming lineup of digital indie games, Microsoft has a bevy of new titles on their way to Xbox One via the ID@Xbox developer outreach program. Standouts include Shovel Knight, a retro platformer that was one of the absolute best games of 2014; The Flame in the Flood, a stylish survival game from BioShock's art director and other ex-AAA developers; and Wasteland 2, a successfully Kickstarted post-apocalyptic RPG. These are some of the surprise announcements Microsoft made this week, but there are plenty of other games on their way to Xbox One in the coming months.

​Shovel Knight holds a special place in our hearts: It's nostalgic without pandering; it's hilarious; and it comes from Yacht Club Games, a team of passionate and talented developers. Shovel Knight is due on Xbox One in April, and it's bringing some friends along for the ride: the Battletoads, characters from the classic NES series of the same name by Rare Ltd.

"It has been so much fun to bring the radical attitude and gameplay of the NES classic to the Shovel Knight world," Yacht Club writes. "If you have ever played Battletoads -- we're pretty sure their extreme adventures left an impression!"

The Flame in the Flood comes from a team of BioShock veterans with experience in a handful of other acclaimed AAA titles: Rock Band 2, Guitar Hero, BioShock Infinite, Halo 2, Halo 3, Homefront and Marvel Heroes. It's the story of a wandering girl and her dog as they navigate a treacherous river and attempt to reach its end, where legend says salvation lies. It's a roguelike, meaning survival is truly everything -- once you die, you start over. However, this is pitched as a roguelike-lite, meaning your dog returns to the head of the river with you, carrying whatever equipment he had when you perished. Small mercies.

Wasteland 2 raised nearly $3 million on Kickstarter in 2012, billed as the sequel to Wasteland, the popular 1988, post-apocalyptic RPG and predecessor to Fallout. Wasteland and Fallout executive producer Brian Fargo leads the charge on this one, with storyline by Fallout co-creator Jason Anderson. The game launched on Steam on September 18, and it's also coming to PlayStation 4 in Game of the Year Edition form.

In this article: GDC, gdc2015, hdpostcross, id@xbox, Indie, microsoft, XboxOne
All products recommended by Engadget are selected by our editorial team, independent of our parent company. Some of our stories include affiliate links. If you buy something through one of these links, we may earn an affiliate commission.