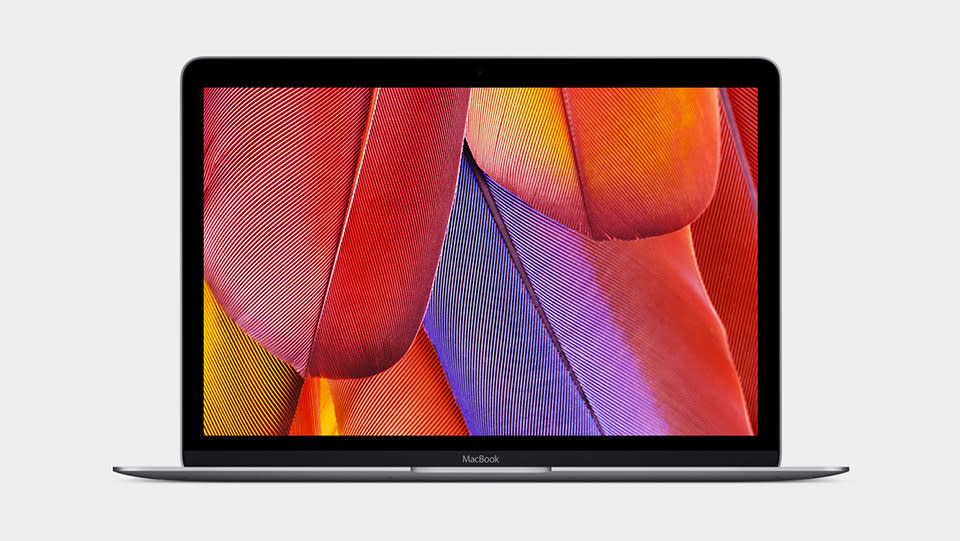 Apple wasn't just showing off fancy watches today -- it also unveiled its new MacBook (check out our full hands-on here!), the first major addition to its ultraportable line since 2010. And yeah, it seems like it was worth the wait. Shaving off even more from the MacBook Air's already thin design, the new MacBook features a sharp 12-inch screen with a "Retina" 2,304 by 1,440 pixel resolution, as well as a thin bezel around the screen and keyboard. It's just 13.1 millimeters thick, around 25 percent less than the 11-inch MacBook Air. The new MacBook brings the best of both worlds from Apple's past laptop lineup: a tiny portable case like the 11-inch Air, and a larger, high-res screen like the Retina MacBook Pro. In short, it seems like the ideal Apple laptop -- something it's been working toward since Steve Jobs slipped the first Air out of a manila envelope in 2008. The MacBook ships on April 10 and starts at $1,299 with a 1.1GHz Core M processor, 256GB SSD and 8GB RAM. There's also a slightly more powerful model for $1,599 with a 1.2GHz processor and 512GB SSD. Apple had to reinvent much of its laptop design for the tiny MacBook. Its keyboard, which covers the entire width of the machine, is 40 percent thinner than the last MacBook Air, but its key caps are 17 percent larger. Its new "Force Touch" trackpad is no longer clickable, but it's pressure sensitive, which opens up entirely new ways of interacting with your screen. You'll be able to press hard on an address in Mail or Safari to get that location on a map, for example, or press down to preview files in Finder. The new MacBook is also fanless, thanks to the Core M's power-saving technology, and its specially designed battery should last for around nine hours of web browsing or 10 hours of video playback.

And yes, those rumors of Apple doing away with typical ports are true. Aside from a headphone jack, the new MacBook features a next-generation USB-C port, which handles charging and typical USB connectivity. (It's so thin a standard USB port couldn't fit!) The new ports will, of course, require new USB cables, but the faster 10 Gbps speeds should make the change worth it. Apple also unveiled two $79 dongles today that will add USB 3 and HDMI/VGA ports to the MacBook. The original MacBook Air was widely criticized for its high $1,799 price, its lack of an optical port and its overall sluggishness. We gave it a so-so review at the time -- it was clearly trying to do more than Apple could actually accomplish. But with Apple's 2010 MacBook Air revision, which added a refined unibody case, faster hardware and an SSD, the company ended up squashing most of those earlier problems. After that, the Air ended up becoming Apple's top-selling computer, as well as the PC industry's leading ultraportable.

The big takeaway from this new MacBook? Apple's clearly bringing some of the inspiration from the iPhone and iPad over to laptops. Why else do you think it's available in silver, space gray and gold colors? It brings a bit of confusion to the company's laptop lineup though -- choosing between a 13-inch Air and the shiny, new 12-inch MacBook is going to be tough. Apple hasn't forgotten about its other laptops, either: They're all getting new fifth-gen Core processors, which could lead to several hours more of battery life, as well as Thunderbolt 2 ports. Apple's top-end 13-inch MacBook Pro is also getting the new Force Touch trackpad.

In this article: apple, applewatchevent2015, MacBook, MacBook 2015
All products recommended by Engadget are selected by our editorial team, independent of our parent company. Some of our stories include affiliate links. If you buy something through one of these links, we may earn an affiliate commission.