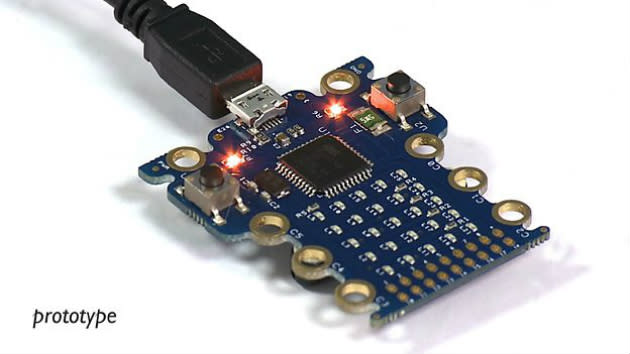 It's the first year of a major new coding curriculum in the UK, and now the BBC wants to play its part in training the next generation of star programmers. The broadcaster is developing a spiritual successor to the BBC Micro, called the Micro Bit, which will give students a physical companion in their path to coding competence. It's going to be a small, standalone device with an LED display that children can carry around with them and plug into a computer to continue their work. The hardware will be basic, as the BBC calls it a "starting point" for "more complex" devices such as the Raspberry Pi and Kickstarter-funded Kano kits. The project is still in a prototype phase, but the BBC claims it'll be ready to give away one million of the new microcomputers to year 7 students this autumn.

The Micro Bit is just the tip of the BBC's new initiative, however. The organisation is developing classroom resources under its Bitesize and School Report brands, as well as a slate of events to inspire would-be coders. Under a new 'Make it Digital' campaign, the BBC is also pulling on some of its biggest TV shows, including Doctor Who, EastEnders and The One Show, to create new programming that will promote technology-fuelled creativity. BBC Three will be launching a talent show called 'Girls Can Code' and there will even be a drama about the making of Grand Theft Auto. Yes, you read that correctly. Grand Theft Auto. While some of this content will be available straight away, the BBC says it's working towards a "big audience moment" in September, when the kids go back to school.

The BBC has teamed up with a ton of companies to make all of this happen, including Google, Microsoft and Samsung, as well as Code Club, the British Computing Society and Tech City UK. At a time when the licence fee is being scrutinised yet again, such an ambitious project is a timely reminder of the BBC's public service contributions.

In this article: BBC, BBC Micro, BBC Micro Bit, coding, coding curriculum, Micro Bit, microcomputer, raspberry pi
All products recommended by Engadget are selected by our editorial team, independent of our parent company. Some of our stories include affiliate links. If you buy something through one of these links, we may earn an affiliate commission.