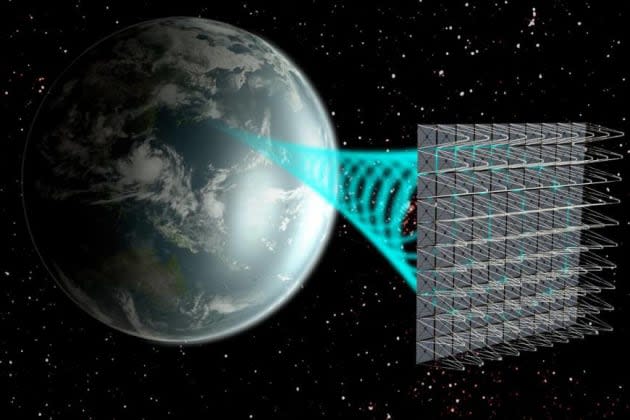 The idea of powering humanity by gathering an endless supply of solar energy from space has taken a huge step towards becoming a reality. Scientists working for JAXA, Japan's space administration, have announced a major breakthrough in wireless power transmission ... in that they've actually been able to do it with a high degree of accuracy for once. The team reportedly beamed 1.8 kilowatts, enough juice to power an electric tea kettle, more than 50 meters to a small receiver without any wires. Up next: scaling the technology for use in tomorrow's orbital solar farms.

The researchers were able to do so by first converting the electrical signal to microwaves, then beaming them to a remote receiver, and finally converting them back into electrons. This successful experiment is the first time scientists have been able to move electrons over any appreciable distance with such a high degree of accuracy, one JAXA researcher explained to the AFP.

JAXA has been diligently working on this technology for years as part of the agency's SSPS (Space Solar Power Systems) effort. The program aims to harness the constant supply of solar energy directly from space using orbital solar farms, then beaming it back to Earth (and into a global grid) via microwave transmission. What's more, these orbital arrays would never have to deal with obscuring cloud cover or darkened nights as their terrestrial counterparts do.

Of course, the SSPS is still far closer to science fiction than science fact but JAXA's latest success clears one of the biggest and most fundamental hurdles facing the program: delivering power from space without having to run an extension cord out to Low Earth Orbit.

In this article: infrastructure, Japan, jaxa, solar, solar power, space, SSPS, wireless
All products recommended by Engadget are selected by our editorial team, independent of our parent company. Some of our stories include affiliate links. If you buy something through one of these links, we may earn an affiliate commission.