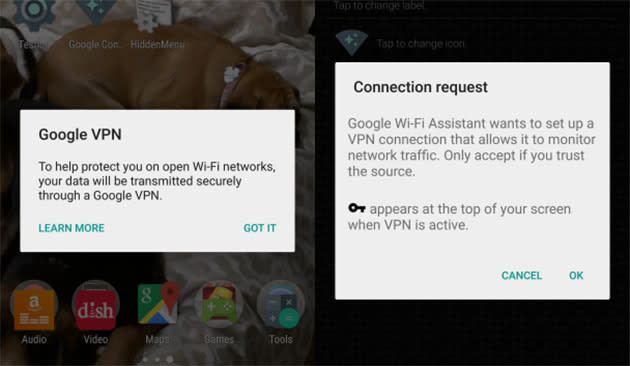 Android 5.1 has been available to Nexus devices for a little while now, and it looks like one of its neatest features - sorry HD Voice and Device Protection - isn't quite ready for public consumption yet. Thanks to a little bit of sleuthing by Pocketables editor-in-chief John Freml, it looks like you'll eventually be able to log into a Google VPN when you connect to one of those potentially sketchy open WiFI networks out there.

To be clear, it takes a bit of work to even get the service responsible for that secure surfing running, and even then it doesn't yet work the way it's supposed to -- all Freml could coax out of it was a dialog box touting the feature and a link to a still-inactive Google support page. Still, considering just temperamental (not to mention potentially tricky) some of those wireless networks can be, Google's onto something really, really important here.

The inclusion of a system-level VPN is a great idea on its own, but it takes on even more significance in light of Google's recently confirmed MVNO plans. Google SVP Sundar Pichai noted in an interview at this year's Mobile World Congress that it'll eventually roll out the "Nexus" of wireless services; that is, it won't necessarily compete with the industry's lumbering giants for customers. Still, it's clear that WiFi is going to play a crucial role in Google's newest mobile push - the Wall Street Journal reported earlier this month that it'll essentially combine T-Mobile and Sprint service with available WiFi networks for phone and data connectivity, and you can bet the search juggernaut has a vested interest in keeping its users' information safe from ne'er-do-wells.

In this article: android, android5.1, android51, google, googlevpn, mobilepostcross, security, vpn, wifi
All products recommended by Engadget are selected by our editorial team, independent of our parent company. Some of our stories include affiliate links. If you buy something through one of these links, we may earn an affiliate commission.