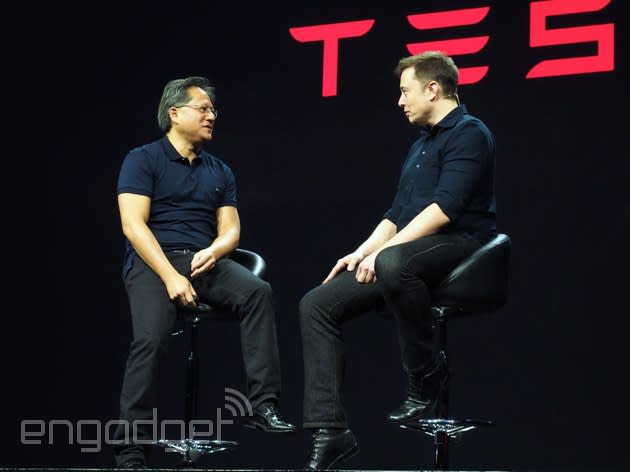 Self-driving cars are no longer fiction, but right now they're far from ubiquitous. That could change, however, if Elon Musk has his way. In a conversation with NVIDIA CEO Jen-Hsun Huang, the Tesla co-founder was bullish about the future of self-driving cars, saying that it's only a matter of time before the autonomous vehicle is commonplace. "You can't have a person driving a two-ton death machine," said Musk, imagining a world where manual driving would be outlawed as it could be considered too dangerous.

Indeed, Huang even imagined that future self-driving cars need not follow the conventional design of current vehicles, since we won't have to concern ourselves with things like airbags, steering wheels and a collision-deterrent chassis. Still, it's not as if that future is coming any time soon. Musk said that even if all new cars were autonomous starting tomorrow, it would still take 15 to 20 years for all cars to be self-driving due to the sheer number of cars that are currently on the road. The same goes for electric vehicles, he said. "If all cars were suddenly electric, it'll still take 20 years to replace the fleet."

Of course, Tesla is already almost there. Its latest Model S P85D comes equipped with intelligent auto smarts like lane detection and active cruise control where it'll adjust to speed limits and stop if it sees brake lights ahead. "It's already getting smarter and smarter even with the current hardware," he said, speaking to Tesla's ability to update its vehicles with over-the-air updates. "We can make huge progress in autonomy already. ... Autonomy is about what level of reliability and safety do you want." Musk is also working on making its cars difficult to hack, with several layers of security. So a hacker might get access to the infotainment system, say, but it'll be much harder to gain control of core functions like the steering.

One of Tesla's biggest stumbling blocks with autonomous driving at the moment is due to the complex urban environment. Freeway speeds are easy, but once the car gets down to 15 to 50MPH is when it gets tricky. "It's the intermediate that's hard," he said. "It's being able to recognize what you're seeing and making the right decision." NVIDIA's newly announced Drive PX autopilot car computer that can spot obstacles and learn from them over time could be a key solution to that going forward. The company is making a Drive PX dev kit available for $10,000.

Hinting at this Thursday's announcement that it'll push an OTA update to "reduce range anxiety" in its Model S cars, Musk said that it'll continue to make updates to make its cars more capable. "We'll see a lot more of that happen later this year."

As for those self-driving cars? Musk is confident that Tesla will be a leader in the space. "We know what to do, and we'll be there in a few years."

In this article: autonomous, cars, elonmusk, jenhsunhuang, nvidia, selfdriving, selfdrivingcar, tesla
All products recommended by Engadget are selected by our editorial team, independent of our parent company. Some of our stories include affiliate links. If you buy something through one of these links, we may earn an affiliate commission.