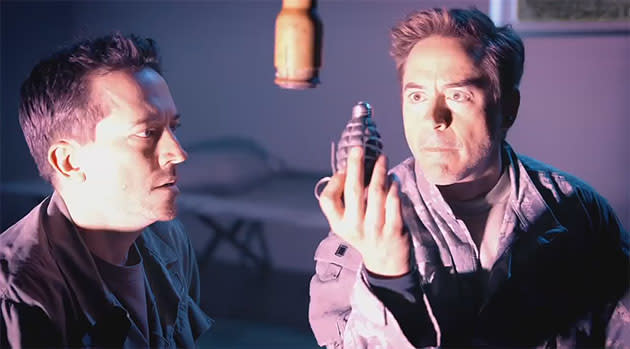 Two men sit in lawn chairs, one in a merman costume. The other, Robert Downey Junior, fires a blowdart at a moon sculpture, which crashes to the ground. "Shoot for the Moon," says the aspirational HTC slogan. Did that make any sense? If so, you're apparently ready to buy an HTC One M9! Yes, HTCs (rumored) billion dollar marketing campaign with Robert Downey Junior isn't over yet, as the company has just revealed 10 new spots. If you can believe it, the new ads are even more perplexing than the company's "Hold This Cat" campaign for the One M8, which at least had a tenuous connection to HTC's acronym logo.

On the other hand, you can't even tell the new ads (coded by color) are for HTC until you see the logo at the end. So what do they mean? Does it really matter? The campaign has already garnered a good deal more publicity than the typical Samsung ad on account of the sheer strangeness, and they certainly exploit Downey Junior's gift for hammy physical comedy. Beyond that, it's hard to tell whether the campaign is genius or if HTC just has no idea what to do with its RDJ deal. We'd bet on the latter, but hopefully sales figures for the flagship One M9 -- essentially a better spec'd version of the last model -- will prove us wrong. You can find all the spots here.

In this article: htc, HTC One M9, mobilepostcross, One M9, RDJ M9, Robert Downey Junior, smartphone
All products recommended by Engadget are selected by our editorial team, independent of our parent company. Some of our stories include affiliate links. If you buy something through one of these links, we may earn an affiliate commission.