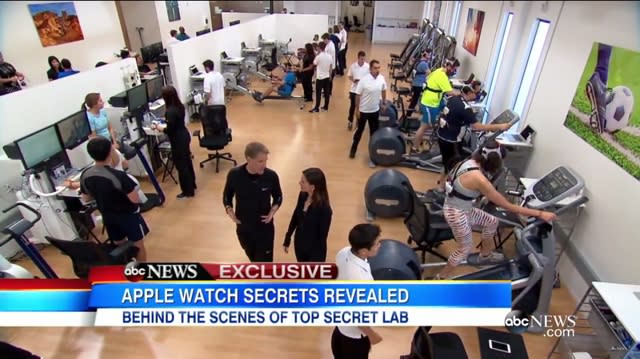 Apple just gave Good Morning America a first look at its secretive fitness lab, where it's spent the past few years putting employees through a battery of tests. And no, they didn't even know they were helping the company get ready for the Apple Watch, which packs in a bevy of sensors for health tracking. "We hooked them up with all the masks and so forth, but we would put on an Apple Watch covered up," Apple SVP of operations Jeff Williams told ABC. Still, we can't imagine Apple's workers didn't know something was up. Aside from all the sensors, and the fact that it's in a nondescript office building, the lab doesn't look that much different from your average gym -- it's packed with treadmills, fitness bikes, and rowing machines. And, most intriguingly, there are climate chambers which allow Apple to replicate a variety of different places (it also tested the Watch all over the world).

While the GMA segment is basically just a puff piece, it's still interesting to see the lengths Apple went to explore fitness tracking. Part of the failure of the Apple Maps launch was that it didn't seem like the company was prepared to handle the massive undertaking of map data management. All of this fitness testing is a sign it may not repeat that mistake again with the Apple Watch. But we suppose that was also pretty clear when Apple debuted its ResearchKit platform a few weeks ago, which has the potential to change the face of medical research.

In this article: apple, Apple Watch, health tracking
All products recommended by Engadget are selected by our editorial team, independent of our parent company. Some of our stories include affiliate links. If you buy something through one of these links, we may earn an affiliate commission.