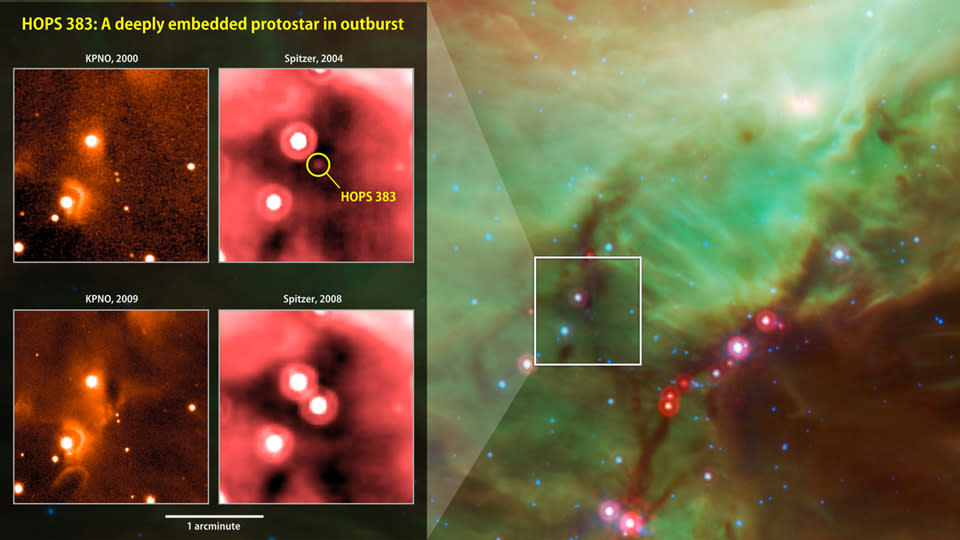 It's trivial to see mature stars in action, but baby stars are another matter. They 'only' spend 150,000 years in their earliest formative stage, and they rarely give away clues that they're around. That's what makes the above pictures so important -- scientist Emily Safron and colleagues have become the first to spot a very young protostar's "outburst," or the growth spurt that typically happens when the forming celestial body accumulates a lot of gas and dust relatively quickly. After poring over data from NASA's Wide-field Infrared Survey Explorer satellite, the astronomers noticed that a future star that was once virtually invisible, HOPS 383, lit up in the space of just a few years; it got 35 times brighter between 2006 and 2008. You won't see it finish growing up (it's 1,400 light years away, for one thing), but it's likely well on its way toward generating its own energy and officially joining the stellar ranks.

In this article: hops383, jpl, nasa, protostar, science, space, star, Wide-fieldInfraredSurveyExplorerTelescope, wise
All products recommended by Engadget are selected by our editorial team, independent of our parent company. Some of our stories include affiliate links. If you buy something through one of these links, we may earn an affiliate commission.