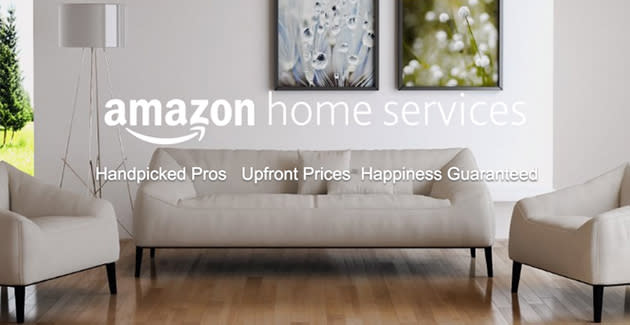 On top of car parts and yoga mats, you'll soon be able to find auto mechanics and gurus at Amazon's incoming Home Services marketplace. The new site lets you find and hire experts in categories like home improvement, lawn & garden, lessons and computers. Amazon may have revealed it a bit prematurely, as the amazon.com/services link has since been pulled. However, Techcrunch's inside sources confirmed the plans and say the formal launch will happen next Monday. Home Services will replace Amazon's Local Services, which also connects Amazon users with local contractors.

The previous offering was aimed at users who, say, just bought a projector and were looking for someone to install it (see the video below). However, Home Services has a much wider range of categories and will compete directly with Craigslist and similar sites. Unlike Craigslist, though, Amazon will hand-pick, background-check and vet the insurance of its providers. In addition, only customers who buy a service will be able to provide reviews, a tact Amazon hopes will fend off underhanded competitors.

The new program significantly ratchets up Amazon's attempt to crack the service economy. But rather than competing with existing providers, Amazon says it'll merely give them another space to hawk their services without paying for the placement or advertising. That said, it will reportedly take a 15-20 percent cut of completed transactions, which may give services pros and customers alike pause. Nevertheless, the service is reportedly set to launch in major US cities including New York, San Francisco, Seattle and Austin next Monday.

In this article: amazon, Amazon Home Services, contractors, handyman, marketplace, Services
All products recommended by Engadget are selected by our editorial team, independent of our parent company. Some of our stories include affiliate links. If you buy something through one of these links, we may earn an affiliate commission.