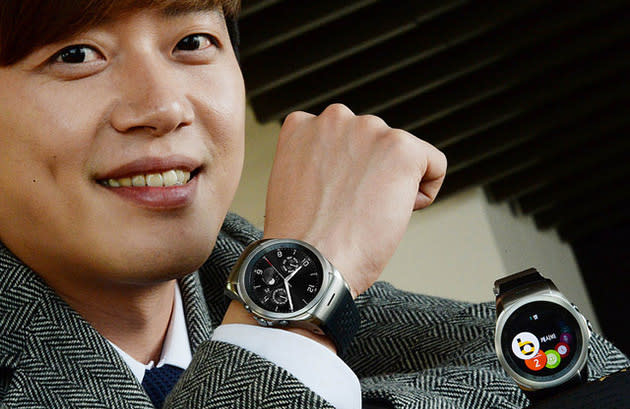 LG is releasing the Watch Urbane LTE in South Korea within the next few days, which means we now have an idea how much one will cost. Turns out the fancy mobile internet-connected smartwatch is priced at 650,000 won or $590 on LG's home turf. That's comparable to the regular Apple Watch, which will set you back at least $549, though the price could still be different when the device arrives stateside. As you might know, the smartwatch has its own SIM card and can make voice calls even without a phone. It can connect to a smartphone via Bluetooth, though, provided it runs Android KitKat or later.

Inside, its components include a 1.2 GHz Qualcomm Snapdragon 400 processor and a 700mAh battery, powering its 1.3-inch round P-OLED display. A few Korean outlets are reporting that the device runs Android Wear, but when we tested one during Mobile World Congress, it was loaded with a proprietary platform based on webOS. Notable features include NFC payment capability, GPS location sharing, speech translator and the choice to use it like a walkie-talkie. Unfortunately, the device's US availability is still unclear at this point. Since AT&T's bringing the LTE-less Watch Urbane to the US, though, we'll keep a close eye on the carrier's new announcements, just in case.

In this article: androidwear, google, launch, lg, mobilepostcross, SmartWatch, SouthKorea, watchurbanelte
All products recommended by Engadget are selected by our editorial team, independent of our parent company. Some of our stories include affiliate links. If you buy something through one of these links, we may earn an affiliate commission.