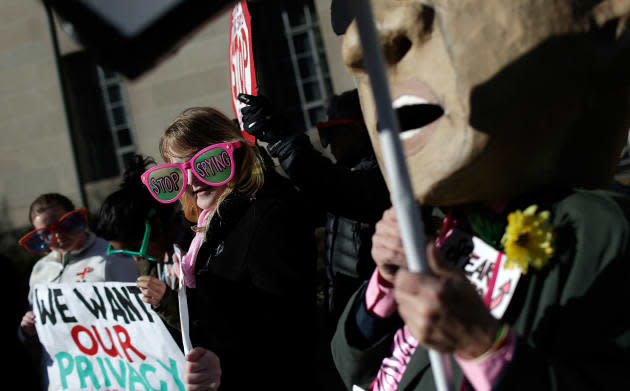 The US Congress, Senate and White House may be torn on what to do with a key Patriot Act spying clause, set to expire on June 1st. But Google, Apple, Facebook and other tech companies in the Reform Government Surveillance coalition know exactly what they want: no more bulk data collection. Together with numerous privacy groups including the ACLU and EFF, they presented a letter to the President and both houses with two key demands. The groups asked for "a clear, strong and effective end of bulk collection practices under the Patriot Act," along with "transparency and accountability mechanisms for both government and company reporting."

The group sees no reason why Congress can't "protect both national security and privacy" at the same time to "restore trust in the internet." Companies like Google and Facebook bore a large part of the public's wrath when it was suggested that they funneled data directly to the NSA, albeit unwillingly or unknowingly. With greater transparency, the group no doubt feels it could at least justify any user data collection it does on behalf of the government.

Companies like Google and Facebook bore a large part of the public's wrath when it was suggested that they funneled data directly to the NSA.

The Patriot Act's infamous clause 215 authorizing bulk spying via the "roving wiretap" provision has already been extended several times. However, the upcoming debates in Congress and Senate will be the first post-Snowden, and figure to be contentious. The heads of both Republican-controlled chambers are dead-set against any major changes, and blocked a bill that proposed minor reforms last year. However, other Republicans and Democrats, along with President Obama, favor significant changes. The letter from the tech coalition is obviously designed to give any representatives who may be on the fence a tiny nudge.

In this article: apple, google, microsoft, NSA, Patriot Act, reforms, spying
All products recommended by Engadget are selected by our editorial team, independent of our parent company. Some of our stories include affiliate links. If you buy something through one of these links, we may earn an affiliate commission.