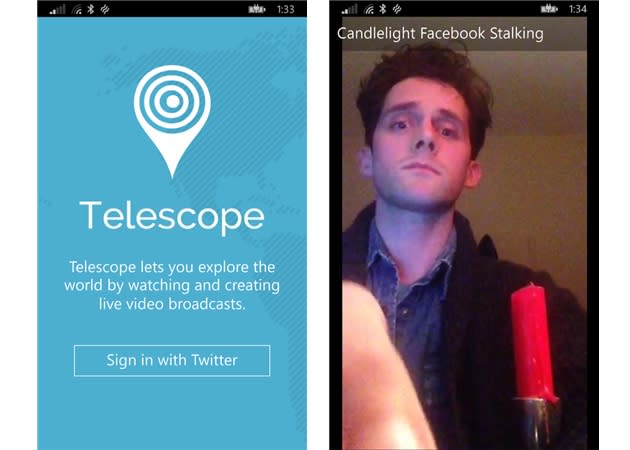 Live streaming apps like Twitter's Periscope and Meerkat are all the rage right now, but so far they've only been accessible to iPhone users. Enter Telescope, a third-party Periscope app for Windows Phone, which opens up the service's live streams to an entirely new audience. You can't actually broadcast your own streams from the app yet (the developer says it's coming), but you can sign up for Periscope and view other live feeds from within the app. It's not a complete solution, but it's something until Twitter rolls out an official Windows Phone client. Expect to wait a while though -- even Twitter's own microblogging app for Windows Phone is still miles behind its iPhone and Android entries. Both Twitter and Meerkat say they're also working on Android apps, but Telescope makes Windows Phone the first platform outside of iOS to get one of those live streaming apps.

In this article: mobilepostcross, Periscope, Telescope, Twitter, Windows Phone
All products recommended by Engadget are selected by our editorial team, independent of our parent company. Some of our stories include affiliate links. If you buy something through one of these links, we may earn an affiliate commission.