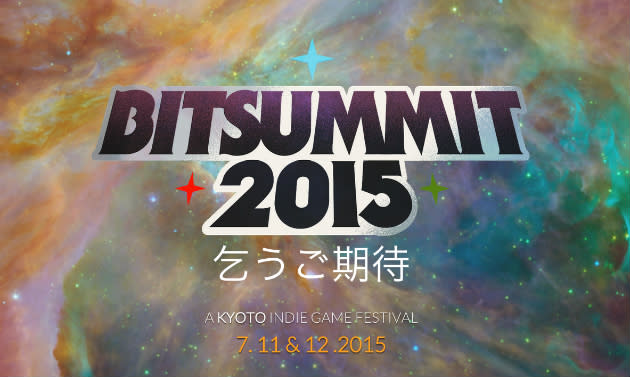 BitSummit has been at the forefront of Japan's independent gaming scene for the past two years, hosting an event that shows off projects from small studios and industry veterans alike, plus live music and an awards show. Last year's showcase attracted 5,000 fans and 130 game developers, including Mega Man designer Keiji Inafune, Epic Games, Sony and Microsoft.

For the 2015 show, BitSummit has partnered with four studios -- 17-Bit, Vitei, Q-Games and Pygmy Studio -- to establish the Japan Independent Games Aggregate, which will oversee all event planning. Plus, one of the leading indie-game promotion houses in the Western world, Indie Megabooth, will help organize BitSummit 2015, lending it an extra layer of delicious credibility. Indie Megabooth President and CEO Kelly Wallick joins JIGA on its board of advisers, and she spoke with us briefly about the new collaboration.

First, we need to establish one fact: Indie Megabooth lives up to its name. It premiered at Boston gaming convention PAX East in 2012 with just 16 developers, and has since exploded in popularity, at times hosting up to 80 games at a range of huge events throughout the year, including GDC in San Francisco, PAX Prime in Seattle and the largest show of the year, Gamescom in Cologne, Germany.

Two hundred developers applied to be in the Indie Megabooth in 2013 alone, and the team had to create a new "shared space" section to accommodate all of the selected games. Historically, these include The Talos Principle, Super TIME Force, Dungeon of the Endless, Hyper Light Drifter, Hotline Miami 1 and 2, Guacamelee, and other high-profile projects.

Indie Megabooth is a big deal in the Western world, and now it's taking that expertise to Japan's rapidly growing indie-gaming scene.

"There's plenty of events in the US and Europe that focus on specific sub-sections of the gaming industry, but only a handful that reach a wide consumer audience all at once (such as PAX)," Wallick says. "We wanted to help established communities work together to push forward into brighter spotlights. In the case of Japan -- where the indie development scene is starting to define itself and what that means -- it's more beneficial to help build that foundation and community so it can grow in its own way first."

BitSummit 2015: Return of the Indies takes place in Kyoto, Japan, at the historic Miyako Messe from July 11th - 12th, and with help from Indie Megabooth and JIGA, it's poised to be a bigger event than ever. BitSummit has established itself as a leading voice for indie games in Japan, Wallick notes, and she says it's already had "a tremendous impact on how not only local developers see their own community, but how the greater international community does as well."

In this article: bitsummit, bitsummit2015, hdpostcross, Indie, indie-megabooth, IndieGames, IndieMegabotth, Japan
All products recommended by Engadget are selected by our editorial team, independent of our parent company. Some of our stories include affiliate links. If you buy something through one of these links, we may earn an affiliate commission.