Insert Coin: Securifi Almond+ takes the touchscreen router to the next level 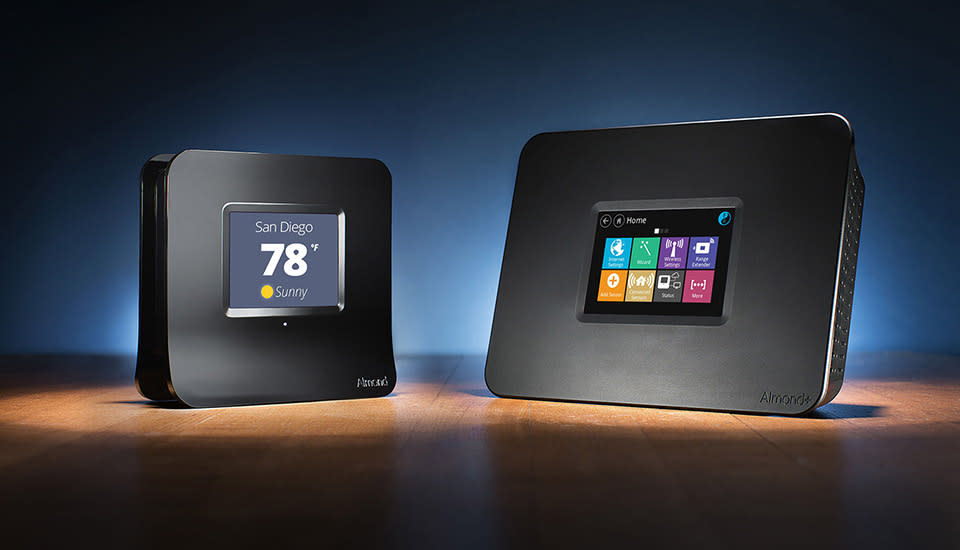 If at all possible, we like to keep our router and hub count down to a nice round number of "one." That's the idea behind a pair of new models from Almond which eliminate the need to have both a smarthome hub and router by combing them into one device. The Almond+ and Almond 2015 both support ZigBee home automation, letting you program security camera, lights or lawn sprinkler automation on the built-in touchscreens. They both also function as full-featured routers, with high-powered amplifiers and extender/bridge/access point functionality in case the main router can't reach a corner of your sprawling mansion.

The Almond+ is the higher-end option, thanks to the addition of Z-Wave home automation, 802.11ac dual-band (2.4GHz and 5GHz) WiFi and 5,000 sf of coverage. The Almond 2015 is more mainstream, but brings 30 percent more coverage than the last model (3,000 sf) on top of the new home automation functionality. Both devices pack color touchscreens that can be used to program "complex home automation rules," according to Almond. As an example, you can set up the system to water the lawn for 5 minutes and close the shades if it's hotter than 100 degrees F between 1-5PM.

Other features include a mobile app (iOS and Android) for remote control, and local control in case you want to keep your home functions away from the internet. Both systems can also be wall mounted. Though Almond was originally a Kickstarter darling, you can grab the new products at Amazon at $99 for the Almond 2015 and $199 for the Almond+.

In this article: Almond, Almond+, home automation, router, Securifi, SecurifiAlmond, SecurifiAlmond+, smart home
All products recommended by Engadget are selected by our editorial team, independent of our parent company. Some of our stories include affiliate links. If you buy something through one of these links, we may earn an affiliate commission.