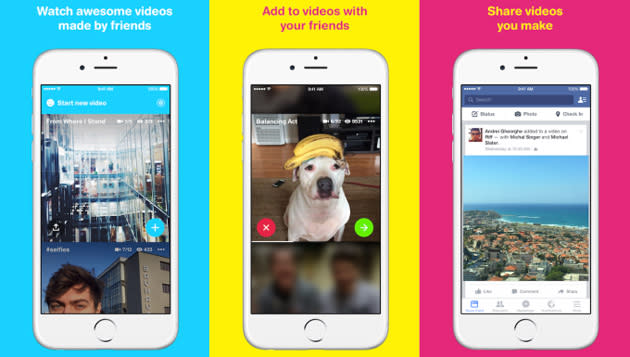 No, Facebook isn't done experimenting with mobile apps yet -- meet Riff, a just-launched app for Android and iOS that has you building collaborative videos. You start by recording a short clip (under 20 seconds) and giving it a topic. After that, your friends can tack on their own videos based around that theme. For example, you can start a "what I do for a living" compilation to find out what all your friends are working on. There's definitely the potential for pranksters to ruin the whole thing, but Facebook lets you either delete individual clips (if you're the creator) or report a whole video if it's going horribly off-track.

Riff probably won't thrive in the way that Instagram has. As our TechCrunch colleagues observe, though, it doesn't have to become a smash hit to help Facebook. At worst, it could teach the social network what people want in user-made video. At best, it could create a kind of Vine-like buzz that Facebook hasn't really seen so far -- it could fuel pass-it-on charity efforts like the ALS Ice Bucket Challenge, or help you make an end-of-school video that features your classmates. These kinds of shared video experiences haven't really taken off in the past, but Facebook's sheer size might get the ball rolling.

In this article: android, facebook, internet, ios, mobilepostcross, riff, smartphone, socialnetwork, socialnetworking, video
All products recommended by Engadget are selected by our editorial team, independent of our parent company. Some of our stories include affiliate links. If you buy something through one of these links, we may earn an affiliate commission.