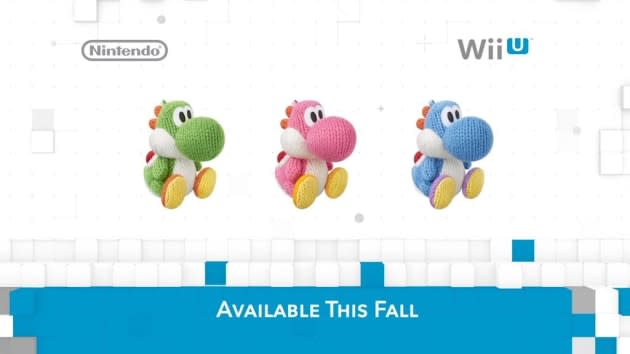 Yoshi's Wooly World races to the Wii U in the fall, Nintendo announced during its live-streamed presentation today. A set of amiibo figures made out of yarn will launch with the game, even though that level of cuteness shouldn't be legal. Yoshi's Wooly World is an adventure game with a two-player co-op mode and an emphasis on exploration and using adorable, yarn-based abilities. It comes from the team behind Kirby's Epic Yarn, another fluffy Nintendo platformer. Nintendo revealed Yoshi's Wooly World in January 2013 -- so we hope no one has been holding their breath.

A new set of #amiibo figures made of yarn will launch later this year with Yoshi's Woolly World. #NintendoDirectNA pic.twitter.com/CgP1cx5gYD

In this article: hdpostcross, nintendo, NintendoDirect, nintendodirectapril2015, yoshis-wooly-world
All products recommended by Engadget are selected by our editorial team, independent of our parent company. Some of our stories include affiliate links. If you buy something through one of these links, we may earn an affiliate commission.