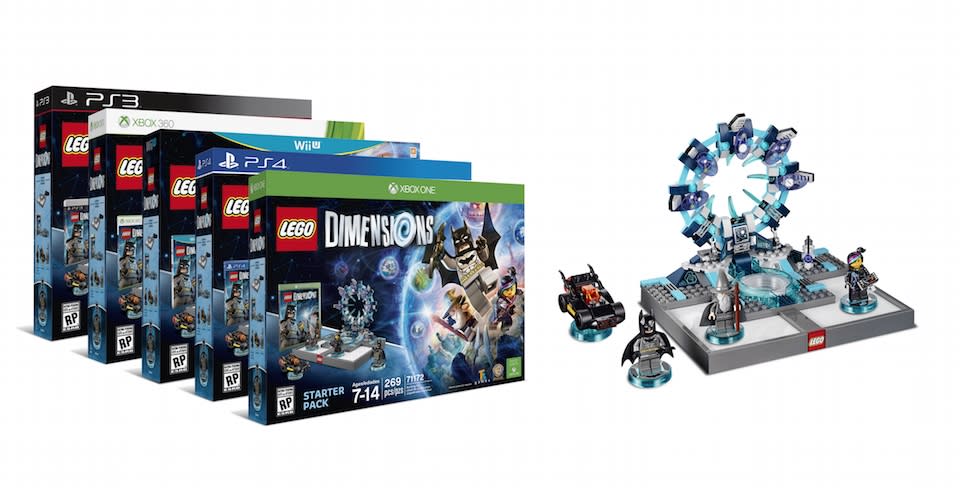 Activision's Skylanders franchise has been a huge success, combining colorful toys with a video game platform that players can easily manipulate with their personal collection. Disney and Nintendo have followed with slightly different takes on the toys-to-life concept, and now Lego is jumping into the fray too. The company is partnering with Warner Bros. Interactive Entertainment and Traveller's Tales, the publisher and studio responsible for most of the existing Lego games, to create a new series called Lego Dimensions.

A $99.99 "Starter Pack" will launch on September 27th in the US (September 29th in the UK) for Xbox 360, Xbox One, PS3, PS4 and Wii U. The game leverages multiple Lego themes, including its original creations and movie tie-ins such as Back to the Future, The Lord of the Rings and DC Comics. Similar to Skylanders and Disney Infinity, Lego is focusing first on a "Starter Pack" which includes a copy of the game, a Lego "Toy Pad" and three special minifigures: Gandalf, Batman and Wyldstyle from The Lego Movie.

Players can place seven different characters, vehicles or items on the "Toy Pad" at once, mixing up different properties in classic Lego style. The company has already confirmed a couple of expansions for 2015, themed around Back to the Future and Lego Ninjago. They'll be joined by character-based "Fun Packs", as well as additional level expansions in 2016. The brick-building company is clearly jumping on the bandwagon here, but it's one of the better-positioned brands to develop a toys-to-life platform. Our only question is whether, in the future, the special minifigures will be customisable. If we could build our own creations and bring them into the game...that would really be something.

In this article: Amiibo, DImensions, Disney, Infinity, Lego, Skylanders, toys, video games, warner bros, warner bros. interactive entertainment
All products recommended by Engadget are selected by our editorial team, independent of our parent company. Some of our stories include affiliate links. If you buy something through one of these links, we may earn an affiliate commission.