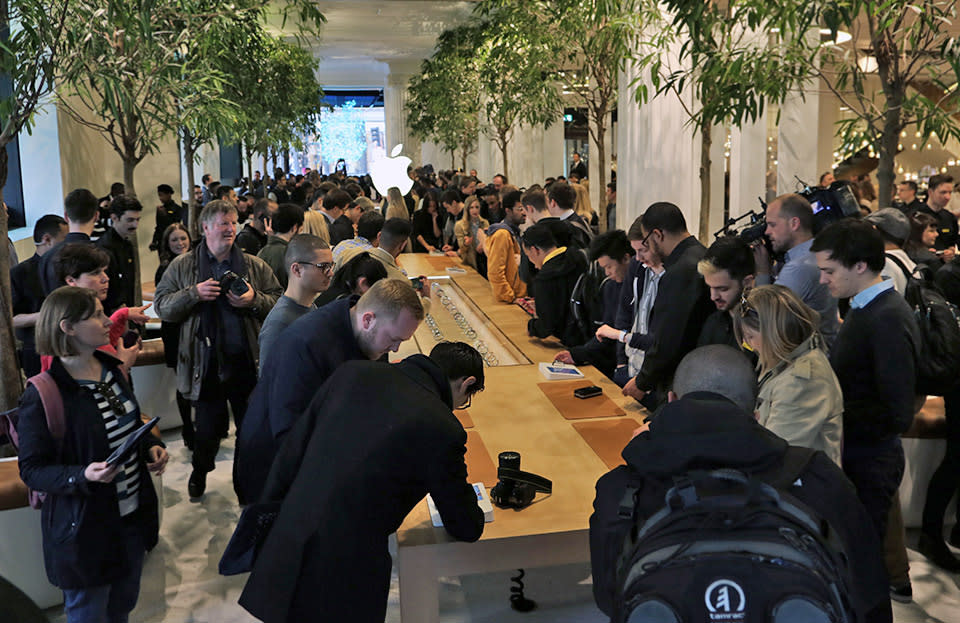 The Apple Watch is unlike any product the Cupertino company has released before. To succeed, it needs to appeal as both a useful gadget and a luxury timepiece that people want to wear on their wrists. With this in mind, Apple has chosen to display its debut wearable in more than just the retail meccas where it normally sells its iPhones, iPads, iMacs and MacBooks. It's also built special "shops-within-shops" inside a trio of high-end department stores in Tokyo, London and Paris. We visited the one in England, which resides inside the famous Selfridges department store on Oxford Street.

When you step inside, it's instantly recognizable as an Apple Store. The company's logo adorns a mirrored wall, and the watches are displayed on a long, wooden table in the center of the room. But there's a distinctly earthy, natural vibe to this space. Tall trees with leafy canopies flank the table and the windows are filled with crafted butterflies. Unlike most Apple stores, you can't just walk up and start using the Apple Watch. There are eight demo stations, but here the timepieces are locked in place with a looping slideshow. An iPad is contained in the same block of plastic, explaining the core features and giving you a chance to learn about the different Apple Watch tiers. They're designed to give people a flavor of the device and explain some of its basic functionality.

Meanwhile, a whole host of Apple Watch combinations covering the Sport, Watch and Watch Edition tiers are protected underneath a glass panel in the center of the table. If you've booked an appointment in advance, someone at the edge of the store-within-a-store will welcome you, take your name and give you some different models to try on. Various drawers dotted around the table contain a "curated" collection of 18 Apple Watch combinations, which you can try on and compare using the brown leather mats placed on top of the table. (These mats are made from Rolls-Royce leather, I'm told.) Only the Sport and Watch timepieces are held in these drawers, however. If you're after the more glamorous Watch Edition, you'll normally be taken to a separate room situated elsewhere in the department store. It'll be a more intimate experience for customers, which makes sense given that Apple's premium wearable starts at $10,000.

Customers that actually want to buy an Apple Watch will be disappointed, however. The company isn't selling anyone a device in-store. So if you're taken by a particular Apple Watch combination, you'll still have to order it online. A staff member told me that Apple will be able to assist -- so if you need help downloading the Apple Store app and completing an order, they'll be happy to help you out during your appointment. Still, it's important to note that nobody will be exiting Selfridges with an Apple bag in tow. The differences between the Apple Watch store in Selfridges and the regular store on, say, Regent Street are subtle. It's more difficult for someone to simply walk in and start playing around with one of the devices, for instance. But there's also far more space for customers and staff to conduct appointments. The leather mats are large, and they've clearly been designed so that people can compare multiple Apple Watches (and possibly their current timepiece) side by side. The leather sofas that surround the trees also imply a slower, more considered sales environment. I can see people taking their time to consider which, if any Apple Watch combination is right for them. It's hardly an impulse purchase, after all.

But make no mistake, the new installation still has Apple's classic design philosophies running through it. As you walk through Selfridges, the difference between Apple's offering and other watch manufacturers' approaches is obvious. The stalls for traditional timepiece makers are more luxurious, more sterile, more... intimidating? In comparison, Apple's store-within-a-store is warmer, welcoming and just plain interesting. Apple might be one of the coolest tech companies, but it's also far more approachable than most in the world of high fashion.

In this article: apple, apple watch, london, selfridges
All products recommended by Engadget are selected by our editorial team, independent of our parent company. Some of our stories include affiliate links. If you buy something through one of these links, we may earn an affiliate commission.