What the Conservative election manifesto means for UK tech 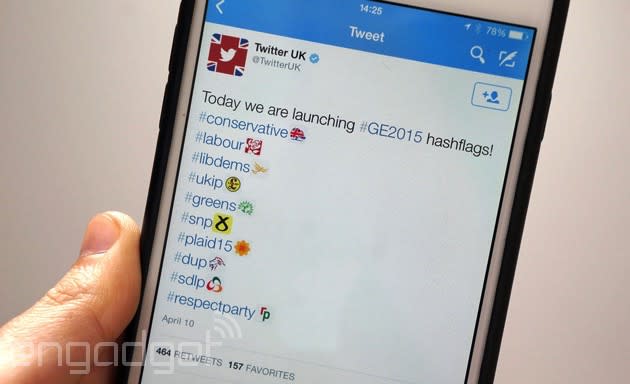 If you hadn't noticed, the upcoming general election is kind of a hot topic in the UK right now, but discussion and debates don't just play out on Question Time. Social media is the perfect place to broadcast your political ramblings, and because you can never have enough emoji, Twitter has today launched a set of "hashflags" to spice up election-centric tweets. In the same way national flags popped up alongside country-code hashtags during the most recent footy World Cup, most political parties now have little icons associated with their preferred hashtags (though they're not showing up in Twitter's Android app currently). Like most things political, you can spin it one of two ways. Either they'll bring a welcome a dash of iconography to tweets, or make your feed a distracting, emoji-ridden nightmare.

In this article: generalelection, hashflags, politics, twitter
All products recommended by Engadget are selected by our editorial team, independent of our parent company. Some of our stories include affiliate links. If you buy something through one of these links, we may earn an affiliate commission.