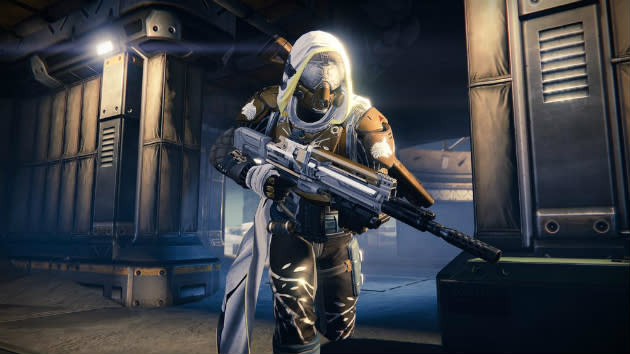 "House of Wolves," the second batch of downloadable content for open-world shooter Destiny, will hit on Tuesday, May 19th. House of Wolves should offer a slew of fixes to Destiny's shared economy, making the climb to level 32 easier and offering more incentives for players to customize their gear with unique upgrades. Destiny's first expansion, "The Dark Below," landed on December 9th, bringing a new cooperative Strike mission, a six-player Raid and loot that allowed players to reach level 32. Some information about both expansions leaked back in September, when players discovered an in-game glitch listing the packs' names and some mission details. Check out the trailer for House of Wolves below.

Update: Bungie offers a little more information about House of Wolves in a new blog post. First, the expansion will not include a Raid, though Bungie is building a new one to be released this year. House of Wolves will include a new battle Arena called The Prison of Elders, a cooperative, three-player "end-game activity focused on variety, replayability, and skill."

In this article: Activision, Bungie, Destiny, DLC, hdpostcross, house-of-wolves, houseofwolves
All products recommended by Engadget are selected by our editorial team, independent of our parent company. Some of our stories include affiliate links. If you buy something through one of these links, we may earn an affiliate commission.