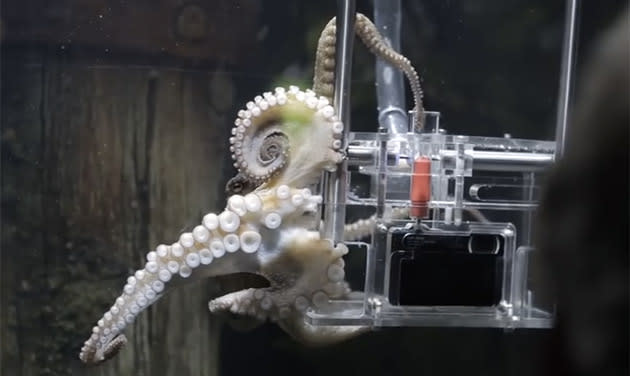 There's an unusual photographer working for Auckland's Sea Land Aquarium. His name is Rambo, and we doubt he personally manages the $2 per shot he earns taking pictures of tourists. That's because Rambo is an octopus -- a very smart one who learned how to press the shutter after three tries. "That's faster than a dog," said Mark Vette, his trainer. "Actually it's faster than a human in some instances." Rambo uses a Sony TX30 compact camera encased in transparent armor that's attached right outside his tank, clicking the red shutter extender whenever guests pose against the backdrop in front of his display. Sure, this is partly a Sony media stunt (all proceeds go to Sea Life's conservation programs, at least), but how often can you say you got your picture taken by an cephalopod? Unfortunately, we're not familiar with New Zealand's laws, so we can't say if Rambo owns the rights to the pictures he takes.

In this article: animals, aquarium, octopus, photography, Phtography, sony
All products recommended by Engadget are selected by our editorial team, independent of our parent company. Some of our stories include affiliate links. If you buy something through one of these links, we may earn an affiliate commission.