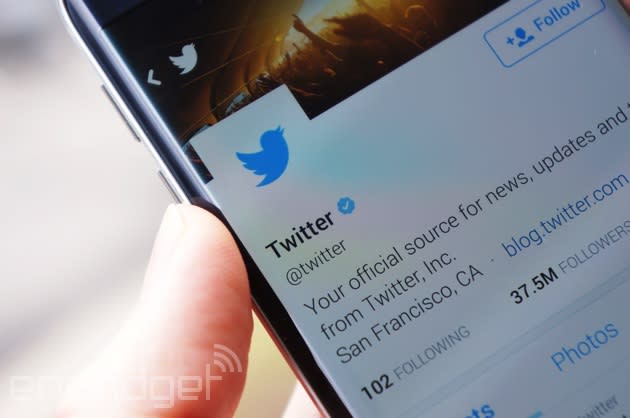 Twitter knows that it's not enough just to make it easier to report abusive tweets. You have to catch and discourage that abuse as often as possible, too. Appropriately, the social network is rolling out a broader abuse policy alongside tools that help it stop harassment quickly. The new rules now cover all promotions of violence against someone, not just "direct, specific" threats -- Twitter can crack down on more than the most serious attacks. That's particularly important for victims of systematic abuse, who frequently chastise Twitter for being soft on people who clearly wish harm but aren't explicit about it.

The new technology should prevent those troublemakers from being as effective as they have been in the past. Twitter is testing a feature that would look for the hallmarks of abusive tweets (hostile language coming from a recently created account, for example) and "limit their reach" -- effectively, filter them out. You'd still have the option of looking at this material, but it wouldn't automatically bombard the feeds of everyone involved. As of today, Twitter can also lock accounts for set periods and make users clean up their act, such as by requiring phone verification (which discourages dedicated trolling accounts) or asking them to delete certain tweets. Think of it as a middle ground that makes it clear a user did something wrong, but stops short of an outright ban.

These measures still aren't perfect. There's a concern that the filtering will prevent the targets of hate campaigns from knowing exactly what's going on, and the overall approach won't necessarily stop the most determined harassers. Still, these measures might just prevent the most vitriolic Twitter users from getting away scot-free.

In this article: abuse, internet, policy, socialnetwork, socialnetworking, trolling, trolls, twitter
All products recommended by Engadget are selected by our editorial team, independent of our parent company. Some of our stories include affiliate links. If you buy something through one of these links, we may earn an affiliate commission.