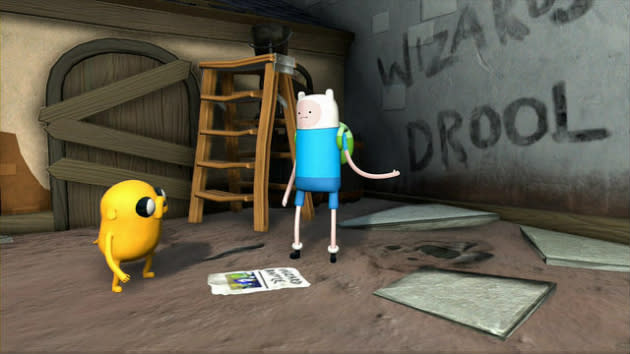 The Adventure Time TV show has been a huge success, but the accompanying video games rarely offer the same level of quality. Developer Vicious Cycle is hoping to change that with Adventure Time: Finn and Jake Investigations, a new 3D puzzler featuring the 12-year-old boy and magical dog. The game is being pitched as an "action-oriented twist" on the graphic adventure genre, which has been enjoying somewhat of a renaissance recently thanks to titles like Broken Age. In the new game, friends Finn and Jake are professional investigators, unravelling disappearances and other strange events in the crazy Land of Ooo. It's the most visually impressive Adventure Time game to date (which isn't saying much), and promises a healthy mix of puzzles and combat. If you're interested, it'll be landing on PS3, PS4, Xbox 360, Xbox One, Wii U, 3DS and PC this November.

In this article: 3DS, Adventure Time, Finn and Jake Investigations, Little Orbit, PC, PS3, PS4, Wii U, Xbox 360, Xbox One
All products recommended by Engadget are selected by our editorial team, independent of our parent company. Some of our stories include affiliate links. If you buy something through one of these links, we may earn an affiliate commission.