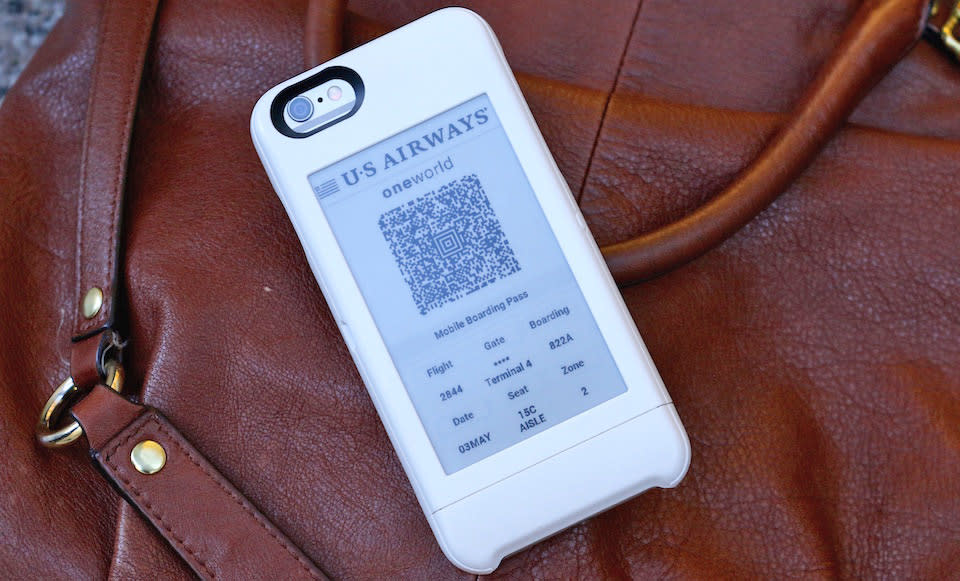 Like most smartphone users, I unlock my screen incessantly so I usually run out of battery when I most need it. But popSLATE promises to be the rehab for my swipe-screen addiction. It's a smartphone case with an in-built E Ink screen that can personalize the back of an iPhone 6. I could use it to flaunt my favorite pictures or if I run out of battery, at say, an airport, I'd be able to flip my phone over to scan my boarding pass. It seemed like the perfect solution for my excessive phone usage. So I turned the back of my phone into a second, always-on screen for about a week. If any of this sounds familiar, it's because popSLATE is the product of a two-year old Indiegogo campaign that raised a little over $219,000. At the time, it promised to be a unique smartphone case with a 4-inch second screen for an iPhone 5. But the company failed to deliver. Now, they're shipping the pending product to their backers, only this time it's suited for an iPhone 6.

At first sight, it's bulky for a case that's not a juice pack so it adds weight to an otherwise slim device. But its excuse is that it has a mind of its own -- it syncs with your iPhone but also works independently. It doesn't show you notifications or new emails, but it can store up to eight images (or screenshots) that you can swap with an inconspicuous button depending on your schedule or mood. The possibilities for personalization seemed immense, but at $130, it needed to do a lot more than offer black and white images to justify it's high price point. Setting it up was the easiest part: slide the phone into it, download the popSLATE app and a couple of quick prompts later the phone is paired to the case via Bluetooth. Its biggest selling point is that it doesn't need your iPhone's battery. It comes with its own internal battery that lasts for at least a week on a single charge. The E Ink screen uses power only when you refresh an image, which in my case wasn't as often as I thought it would be so I didn't need to charge it once. But ironically, with my Bluetooth on for days, it drained my phone earlier than usual on most days.

The app tries hard to be a social network. It lets you link your Instagram account for quick access to your favorite square-format pictures or take new images so you can "pop" them to the back of your phone. It automatically shares those images on its network, but you can choose to opt out. There's a follow feature so you can set up a community but it's missing a crucial feature -- you can't like or comment on anything so there's no validation or interaction. You can only "re-pop" the black and white images but it's not half as satisfying as a red-heart on your Instagram. popSLATE is essentially a protective case that wants to make use of the real estate that's wasted on the back of your phone. But it's not like a Yotaphone 2 that has a fully functional second E Ink screen on the back. This one doesn't replicate the experience of your main screen. It needs you to remember what you might need to access when your phone runs out of juice and then "pop" it. The information I sent to the back was handy, but it wasn't always clear. Some street names in a Google Maps screenshot were illegible and my calendar was blotchy too. I did play around with the images, though. Most of them looked great with a vintage vibe when converted to E ink. So at the very least, I figured those artsy shots would be a great conversation starter. But popSLATE didn't grab any attention from people around me. It was probably the dull grey tones that didn't pique anyone's curiosity. But then, maybe, people are already too jaded from looking at smartphone cases that aspire to do more than just protect your phone.

A week into it, I hardly remembered to flip my phone over. And even when I did, I found no real use for the display. Every time I saw the low-res monochromatic images on the back, I found myself missing my vibrant (eyesight weakening) screen that was waiting to be unlocked.

In this article: eink, hands-on, IndieGoGo, iphone6, phone case, popSLATE, SecondScreen, yotaphone
All products recommended by Engadget are selected by our editorial team, independent of our parent company. Some of our stories include affiliate links. If you buy something through one of these links, we may earn an affiliate commission.
Share
Tweet
Share