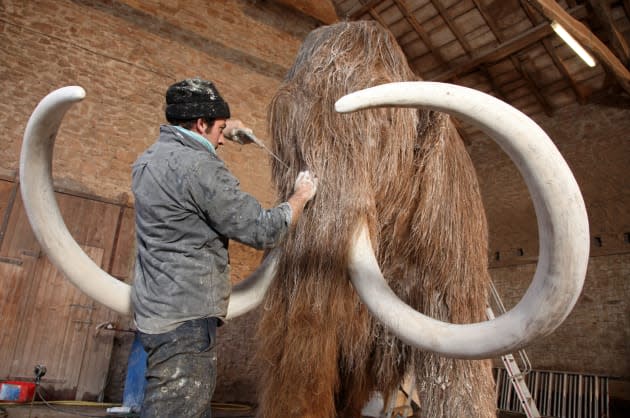 A team of Harvard Medical School geneticists have deciphered the complete genomes of not one but two individual woolly mammoths. The results, recently published in the journal Current Biology, are already providing valuable insights into how the species initially died out.

Wooly mammoths appeared around 700,000 years ago, first in Siberia before expanding throughout Eastern Europe and North America. However, this DNA study suggests that mammoths then suffered a pair of population crashes -- one 280,000 years ago and another just 12,000 years ago. In the end, their population reportedly shrank to fewer than 1,000 individuals, the last of whom lived trapped on a Siberian island for nearly 6,000 years before severe inbreeding led to their complete extinction.

The Harvard team's efforts build upon a growing body of evidence and experimentation aimed at bringing the furry elephants back to life. Researchers from Pennsylvania State University led a pioneering, albeit unsuccessful, 2008 study that sought to extract a complete nucleic DNA strand from a frozen specimen. Teams from South Korea's Sooam Biotech Research Foundation are also currently decoding samples from "Buttercup", a 40,000 year old specimen dug out of Siberia's permafrost last November. While these previous efforts were able to suss out long strands of DNA from their samples, Harvard's research is the first to extract a full nucleic genome. Additionally, another Harvard Medical team, led by Professor George Church, announced last month that they'd successfully spliced short lengths of DNA code into modern elephant cells.

But even with the complete genetic instructions for building a wooly mammoth, many scientists remain skeptical that engineering a new one is even technically (or at least ethically) possible at this point. "Our genomes bring us one critical step closer to re-creating a mammoth," Swedish Museum of Natural History geneticist Love Dalen told NBC News. "I think it would be cool if it could be done, but I'm not sure it should be done."

In this article: Current Biology, DNA, George Church, Harvard Medical School, Harvard University, NBC News, North America, Pennsylvania State University, Siberia, South Korea, WoollyMammoth
All products recommended by Engadget are selected by our editorial team, independent of our parent company. Some of our stories include affiliate links. If you buy something through one of these links, we may earn an affiliate commission.