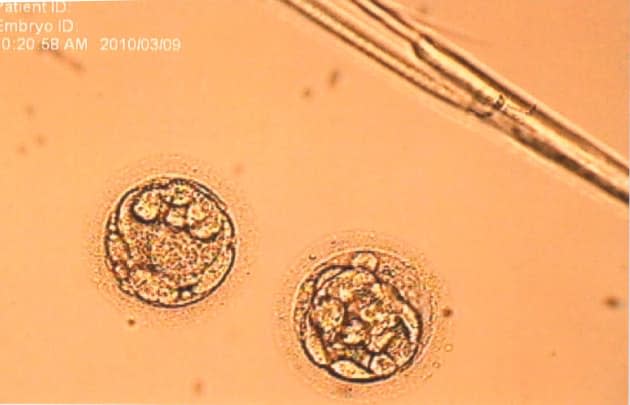 For the first time in history, a team of researchers have successfully edited the genes of a human embryo. The researchers from Sun Yat-sen University in Guangzhou reportedly used the CRISPR/Cas9 technique to knock a gene called HBB, which causes the fatal blood disorder β-thalassaemia, out of donor embryos. This marks the first time that the CRISPR technique has been employed on an embryonic human genome. The CRISPR/Cas9 method utilizes a complex enzyme (aka a set of "genetic scissors") to snip out and replace faulty gene segments with functional bits of DNA. The technique is well-studied in adult cells, but very little published research has been done using embryonics. And it's the latter application that has bioethicists up in arms.

On one hand, advocates for genetic modification argue that it could lead to medical techniques that eliminate devastating genetic disorders like Parkinson's, Down syndrome or Sickle-Cell Anemia before a person is even born. On the other hand, critics warn that tinkering with the blueprints of life to prenatally destroy disease could lead to unintended genetic consequences that are even worse than whatever disease we're trying to cure.

Then there's also a whole other argument as to whether this technique crosses ethical boundaries. "We are humans, not transgenic rats," Edward Lanphier, president of Sangamo and chairman of the Alliance for Regenerative Medicine, recently wrote in a Nature op-ed. "We believe there is a fundamental ethical issue in crossing the boundary to modifying the human germ line."

Still, the potential for future misuse has rarely slowed the development of a new technology -- just look at the automobile, assault rifle or atom bomb. According to the Sun Yat-sen research team, they eventually called off the study, not because they created genetic monstrosities, but because the technique failed so often. Out of the 86 total embryos utilized in the study, 71 survived the initial CRISPR snips, only 28 successfully spliced in the new DNA and a small fraction of those splices actually generated a functional protein. "If you want to do it in normal embryos, you need to be close to 100 percent," lead researcher Junjiu Huang told Nature. "That's why we stopped. We still think it's too immature." The researchers published their findings in a recent issue of the journal Protein & Cell.

In this article: china, CRISPR, CRISPRCas9, GeneticEngineering, genetics, medicine, sunyatsenuniversity, timeline16genedit
All products recommended by Engadget are selected by our editorial team, independent of our parent company. Some of our stories include affiliate links. If you buy something through one of these links, we may earn an affiliate commission.