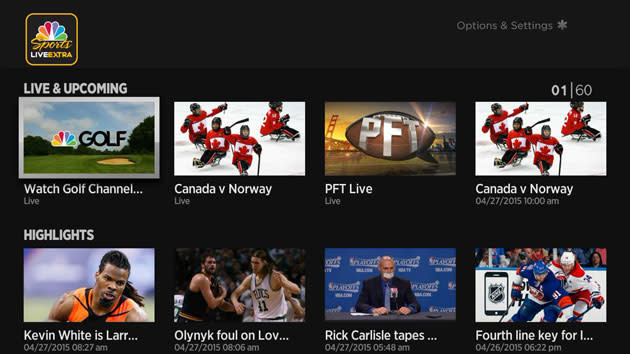 You have more than a few ways to watch live sports on Apple TV and Roku boxes, but there are still a few gaps. What if you want to catch lots of golf tournaments? If you live in the US, you won't have to worry quite so much. NBC Sports has launched versions of its Live Extra app for both media hubs, making sure that you won't miss out on the Golf Channel, the Olympics, Sunday Night Football and some internet-only events, such as certain Premier League matches. You'll still need a qualifying TV subscription to watch in the first place, but this beats missing out on some big-screen sports simply because you're visiting friends.
In this article: appletv, hdpostcross, internet, nbc, nbcsports, nbcsportsliveextra, nbcuniversal, roku, sports, streaming, television, tv, video
All products recommended by Engadget are selected by our editorial team, independent of our parent company. Some of our stories include affiliate links. If you buy something through one of these links, we may earn an affiliate commission.