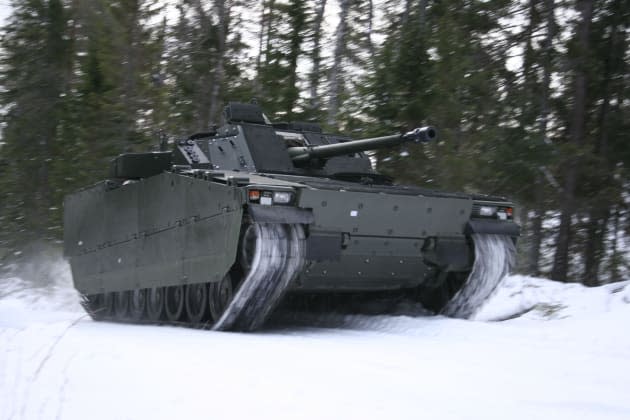 BAE Systems recently announced that it has adapted the active damping suspension originally made for F1 cars to a Swedish Combat Vehicle, the CV90. This is reportedly the first system of its kind for a tracked vehicle, although BAE has been working on it for a few years. Unlike conventional, passive suspensions that simply absorb the shock of a bump or divot in the road as it occurs, active suspensions calculate vehicle speed against upcoming terrain to selectively tighten the suspension and keep the vehicle level. This eliminates both body roll and pitch acceleration as well as translates into a higher top speed since all four wheels (or in this case, both tracks) stay in firm contact with the ground. It works well enough for the CV90 to set a speed record on a "rough terrain course", and for F1 to have banned the tech in 1993, although it may make a comeback.

According to BAE, the CV90's top speed increased about 35 percent with the new suspension -- enough to outrun a main battle tank. It's also improved gunner accuracy by reducing vehicle pitch acceleration by 40 percent and reportedly reduced the overall wear and tear for the armored vehicle. There's no word on how quickly this new system will be applied the existing fleet of CV90s currently operating throughout Europe.

In this article: BAE Systems, British Aerospace, combatvehicles, CV90, Formula One car, military, video, war
All products recommended by Engadget are selected by our editorial team, independent of our parent company. Some of our stories include affiliate links. If you buy something through one of these links, we may earn an affiliate commission.