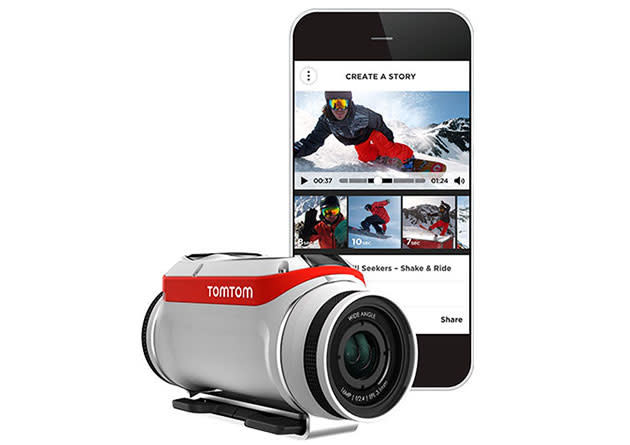 TomTom, a company best known for its GPS gadgets and a line of watches for runners and athletes, is diving deeper into action sports. Meet the Bandit camera: a GPS action cam that'll beam footage to a connected smartphone. If you're in a hurry, and don't want to futz with proper edits on a computer, TomTom's app will pull videos from the camera so you can share them quickly -- all you have to do is give your phone a shake. The company claims that its device is the first of its kind to pack a built-in media server, capable of processing files before sending them to your phone. That's where the phone shaking comes in: doing so will alert the camera/app duo to automatically compile a video for you. In addition to that bit of heavy lifting, the Bandit's on-board motion and GPS automatically tag highlights based on speed, altitude, acceleration, G-force and heart rate -- the last of which is likely tracked with one of TomTom's fitness watches. Don't worry, you can manually pick those spots, too.

As you might expect, the mobile app allows you to edit and add music and stats overlays to those videos if you don't like what the software automatically creates. The app also servers as a viewfinder so you can keep an eye on what's being captured in real time. In terms of the camera's specs, the Bandit shoots 1080p at 30 and 60 frames per second and 720p at 60 and 120 fps with native time lapse and slow motion features. It's also 4K capable (at 15 fps, like the GoPro Hero 3/3+) and snaps 16-megapixel stills should the need arise, and both WiFi and Bluetooth wireless connectivity are included, too. There's also an included Batt-Stick that allows for an additional 3 hours of footage while handling microSD storage and USB transfers. Like other action cams, there's a collection of mounts and accessories to help you get the best view, including a waterproof housing and remote.

Unfortunately, the companion app is iOS-only at launch, but an Android version in the works. Speaking of launch, the Bandit will arrive next month for €429 (about $475) with a premium pack that includes some of those accessories, and probably a bigger price tag, set for June. There's no definite timeline for the US just yet, as the on-sale date is expected sometime later this summer.

In this article: actioncam, actioncamera, bandit, camera, tomtom, tomtombandit, video, videocamera
All products recommended by Engadget are selected by our editorial team, independent of our parent company. Some of our stories include affiliate links. If you buy something through one of these links, we may earn an affiliate commission.