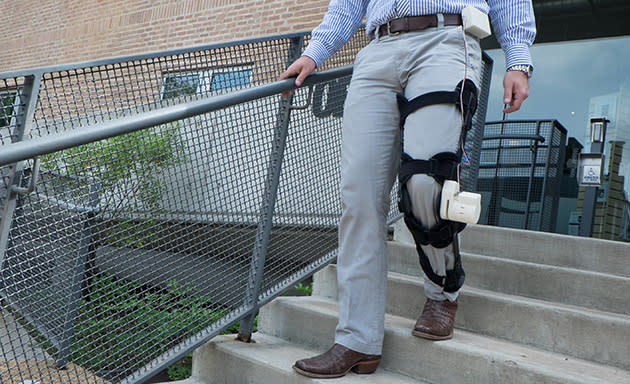 Someday, folks with artificial hearts might have to take long, daily walks to stay alive -- not because exercise is good for their health, but because those walks literally power their synthetic organ. A team of students from Rice University called "Farmers" are developing a device that can generate energy and feed it back into the body to be used by an artificial heart. Their creation? A modified medical leg brace with a motor attached right on the joint, so it can produce energy every time the user bends his knee. An earlier prototype for the same project -- it's a multi-year endeavor, and the current model is the brainchild of the third batch of students -- could also generate power by walking. However, that wasn't a brace, but a shoe with a pedal attached to the sole.

According to the team, it was a real challenge making the brace lighter and more wearable. Their main tester said the current version's "comfortable enough to wear for long periods," though, so it sounds like they succeeded. They also managed to add a system that converts energy into electricity that goes straight into storage -- a lithium-ion battery, to be specific -- at the beginning of 2015.

As you might have guessed, it's not exactly capable of powering implantable medical devices yet. But the Farmers are hoping that future iterations will be able to wirelessly transmit electricity to artificial hearts.

In this article: artificialheart, KneeBrace, RiceUniversity, study
All products recommended by Engadget are selected by our editorial team, independent of our parent company. Some of our stories include affiliate links. If you buy something through one of these links, we may earn an affiliate commission.