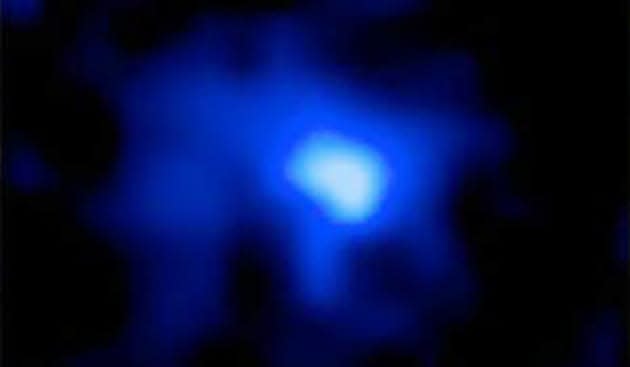 Peering through the voids of space is a lot like time travelling: the deeper we gaze into a seemingly endless Universe, the further back in time we can see. Now, a team of researchers led by astronomers from Yale University and UC Santa Cruz have announced that they've discovered the most distant galaxy to date. In fact, the galaxy, known a EGS-zs8-1, is so ludicrously far from Earth that light just now reaching us from it is about 13 billion years old. To put that in perspective, the Universe itself is 13.8 billion years. That means this galaxy began forming stars when the Universe was only 5 percent of its current age -- barely 670 million years after big banging into existence.

"It [EGS-zs8-1] has already built more than 15% of the mass of our own Milky Way today," Yale astronomer Pascal Oesch said in a statement. "But it had only 670 million years to do so. The universe was still very young then." Astrophysical Journal Letters published the team's research on May 5. Astronomers first noticed EGS-zs8-1 using the Hubble Space Telescope and then confirmed with the MOSFIRE instrument on the W.M. Keck Observatory's 10-meter telescope. Though identification wasn't too difficult given that the galaxy is among the brightest objects in the early universe.

Researchers plan to further study the galaxy -- and how it helped shape the early Universe -- once the James Webb telescope is launched in 2018. "Our current observations indicate that it will be very easy to measure accurate distances to these distant galaxies in the future with the James Webb Space Telescope," co-author Garth Illingworth of the University of California-Santa Cruz said in a statement. "The result of JWST's upcoming measurements will provide a much more complete picture of the formation of galaxies at the cosmic dawn."

In this article: ESA, HubbleSpaceTelescope, JamesWebbSpaceTelescope, KeckTelescope, Milky Way, NASA, Peering, The Astrophysical Journal, ucsc, Yale
All products recommended by Engadget are selected by our editorial team, independent of our parent company. Some of our stories include affiliate links. If you buy something through one of these links, we may earn an affiliate commission.