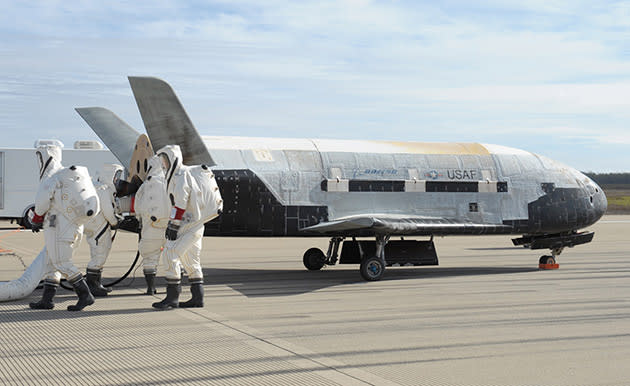 While the Boeing-built X37B drone's nature remains mysterious, we at least know that it's a test-bed for futuristic space tech. When it launches on May 20th, it won't only be testing a new type of Hall effect thruster for the Air Force, it will also be carrying a collection of 100 different materials that can potentially be used for future spacecraft, rovers, rockets and other space hardware. The project is called Materials Exposure and Technology Innovation in Space (METIS), and it was designed to build on the data gathered from previous testing onboard the ISS. Any material meant to be used in space has to undergo rigorous testing first before it's incorporated into billion-dollar machines and vehicles.

Since it's extremely difficult to emulate the conditions of space on Earth, astronomers have to actually send samples out there to see how they'd hold up in harsh environments for extended periods of time. The quarter-sized samples that will take off with the X37B, for instance, will remain in orbit aboard the drone for 200 days. When they get back, a a team will assess how they fared, and manufacturers can choose from among those that performed well.

However, this doesn't mean the Materials on International Space Station Experiment (MISSE) mission is dead. It will resume in a couple of years after a short hiatus, following a 12-year stint (2001 to 2013), wherein it flew 4,000 samples to the ISS. Some of those are static-dissipative coatings, which ended up being used on both the Curiosity rover and SpaceX's Dragon capsule.

In this article: nasa, space, x37b
All products recommended by Engadget are selected by our editorial team, independent of our parent company. Some of our stories include affiliate links. If you buy something through one of these links, we may earn an affiliate commission.