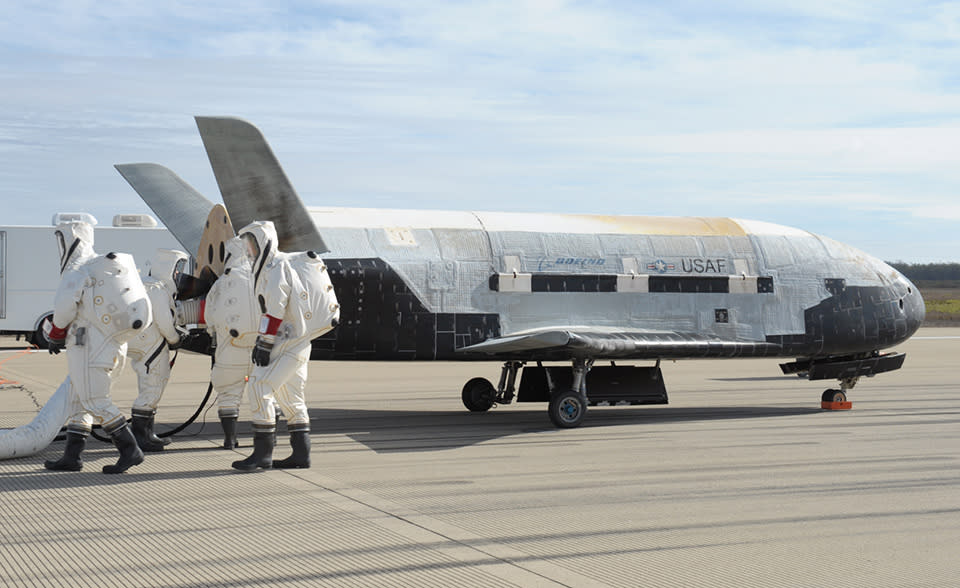 Ask someone in the street what they know about the Air Force's top-secret space plane and you'll probably wind up getting pinched by the NSA. Nobody can claim to know much about the X-37B, beyond the fact that it's the force's long-term space vehicle, capable of staying in orbit for more than a year at a time. In the run up to the craft's next jaunt around the planet, however, someone has let slip the details of an experiment that it'll be carrying out. According to Spaceflight Now, Air Force officials have revealed that the autonomous drone will be used as the test-bed for a new type of Hall effect thruster.

Now, the biggest problem with spaceflight is that the more fuel a craft carries, the heavier it is to launch. Since it costs roughly $3,000 per pound to put objects above the atmosphere, equipping a shuttle or satellite with enough gas to get around is prohibitively expensive. A Hall thruster lets small craft scrimp on the fuel costs by electrically charging super-light Xenon particles. This mix can then produce a weak but constant source of propulsion, perfect for making small adjustments to your trajectory in space. The trade-off, of course, is that the mix isn't strong, so the thruster has to burn for longer in order to do the same job. Imagine it a bit like trying to push a gondola with a twig: it's lighter in your hand than a pole, but it'll take you a lot longer to get somewhere.

If the X-37B is testing a top-secret, souped-up version of this technology, then it's easy to speculate that the Air Force is working on a spacecraft that can stay in orbit for longer and cost significantly less to launch. That same hardware would also be invaluable for scientific and commercial satellites, each one struggling to balance out the competing needs of cost, weight and fuel efficiency. Now, don't go telling any of your friends this, or you might find yourself being snatched from your bed at night by shadowy operatives in dark suits.

In this article: AirForce, Boeing, NASA, OrbitalTestVehicle, X-37B, X37B
All products recommended by Engadget are selected by our editorial team, independent of our parent company. Some of our stories include affiliate links. If you buy something through one of these links, we may earn an affiliate commission.