Samsung Money is a debit card tied to Samsung Pay 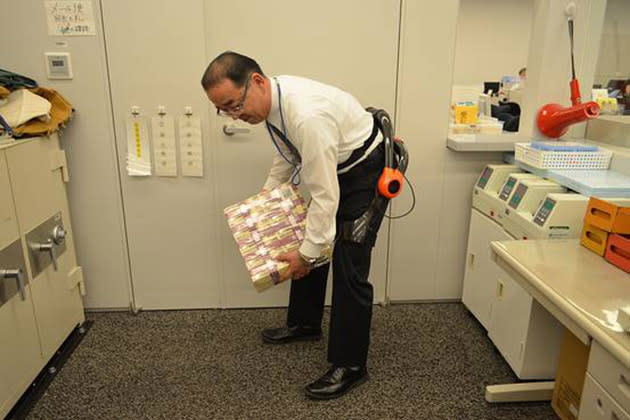 Japan's Sumitomo Mitsui Banking Corporation announced Friday that it will provide Hybrid Assistive Limb (HAL) exosuits to select senior employees as part of a pilot program aimed at reducing the strain of moving currency. "There have been many cases when a physical burden was placed on senior employees carrying heavy parcels of banknotes and coins. By adopting Cyberdyne's robotic suits, we can help reduce that burden," Tomoyuki Narita, a spokesman at SMBC, told the Wall Street Journal. About 16 percent of Sumitomo's employees (and 25 percent of the nation) are over the age of 65. The HAL is designed to augment its user's strength, reducing the perceived weight of an item by 40 percent so that a 10-pound weight only "feels" like it weighs 6 pounds. Should the pilot program prove effective, Sumitomo could expand it to more branches throughout Japan.

In this article: banking, exosuits, HAL, HybridAssistiveLimb, Japan, powersuit, prosthetics, robotics, smbc
All products recommended by Engadget are selected by our editorial team, independent of our parent company. Some of our stories include affiliate links. If you buy something through one of these links, we may earn an affiliate commission.