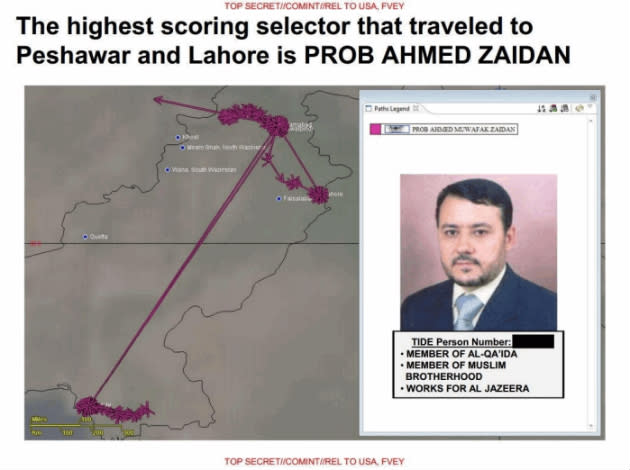 The US government has marked Ahmad Zaidan, an influential journalist and Al Jazeera's longtime Islamabad bureau chief, as a member of Al Qaeda and the Muslim Brotherhood, according to NSA documents unearthed by whistleblower Edward Snowden (via The Intercept). Zaidan has been embedded in Afghanistan and Pakistan throughout his career, and he's had unique access to top Taliban and Al Qaeda leadership, including Osama bin Laden. In 2011, Zaidan and Al Jazeera released a documentary about bin Laden, including interviews with Taliban fighters, government workers and journalists who knew him. Zaidan has, in the course of his job, regularly traveled across the Middle East and communicated with Al Qaeda officials -- which is why the US government's SKYNET program marked him as a member of Al Qaeda and the Muslim Brotherhood.

Zaidan's file was singled out as an example of the power of SKYNET, the US program that attempts to find suspicious patterns within location and communication information gathered from bulk call records. SKYNET recognized Zaidan as a likely Al Qaeda courier, though it appears the NSA had an existing file on the journalist, The Intercept reports. A 2012 presentation describes some ways SKYNET marks terrorists: It notes behaviors such as "excessive SIM or handset swapping," "visits to airports" and "overnight trips," and tracks travel to specific locations. The program then asks, "Who does the traveler call when he arrives?" the site reports. The call data comes from major Pakistani telecom providers, according to the presentation -- for the experiment that marked Zaidan, SKYNET analyzed 55 million Pakistani cell phone records.

In a statement provided via Al Jazeera, Zaidan wrote the following:

For us to be able to inform the world, we have to be able to freely contact relevant figures in the public discourse, speak with people on the ground, and gather critical information. Any hint of government surveillance that hinders this process is a violation of press freedom and harms the public's right to know.

The US court of appeals ruled yesterday that the NSA's bulk collection of phone data is illegal and "exceeds the scope of what Congress has authorized," according to one judge. Congress is currently debating the future of the NSA's surveillance program. Whistleblower Snowden says he's pleased with the federal court's ruling.

In this article: AlJazeera, EdwardSnowden, government, nsa, skynet, surveillance, us
All products recommended by Engadget are selected by our editorial team, independent of our parent company. Some of our stories include affiliate links. If you buy something through one of these links, we may earn an affiliate commission.